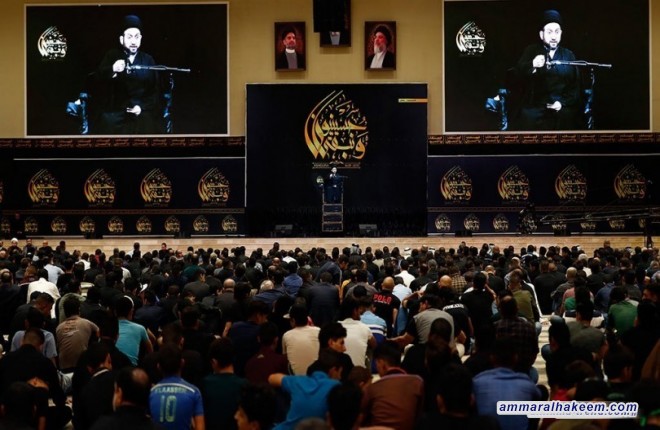 Head of the National Iraqi Alliance, Sayyid Ammar al-Hakim, at the eighth evening of Muharram in his office in Baghdad Friday 29/9/2017 called to consider the initiative of the supreme religious authority as a road map to resolve the crisis between the Kurdistan Regional Government and the federal government according to the Constitution and the law, and arbitrate the Federal Court for final decision, his eminence indicated that the religious authority is for all and have prudent and observant opinion not based on private readings or political interests, pointed out that the religious authority is preserved in speech, it speaks only when the country is subjected to shocks and great dangers, called on the leadership of Kurdistan to depend dialogue after announcing the cancellation of the referendum.

His eminence confirmed that the initiative of the religious authority had set the parameters and standards, and warned of separatist tendencies, his eminence wondered whether we will invest time to consider it, this initiative is an extension of Imam al-Hakim's (sanctify his soul) position when issued the Fatwa of prohibiting fighting the Kurds, the initiative of Imam Sistani came to keep Kurds' constitutional and legal rights anywhere Kurd people are located, and also called for investing time before it is too late and external factors intervene and reaching the point of no return.

His eminence expressed his support to abiding to the Constitution and the law performed by the Iraqi House of Representatives and the Government, warned of exposing any Kurdish citizen and interests to any harm for they are helpless, his eminence addressed the people of Kurdistan, in respect of salaries, and indicated if there was a commitment to the Constitution and handing over oil to the federal government, the employee in the region would receive their salaries as sons of Baghdad and other provinces.