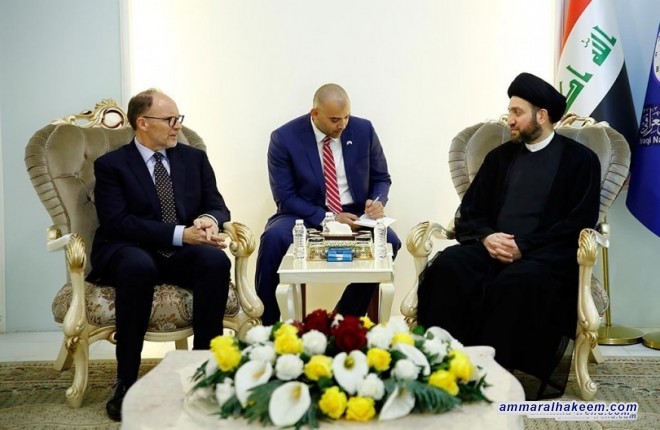 Head of the National Iraqi Alliance, Sayyid Ammar al-Hakim, in his office in Baghdad received US ambassador to Baghdad Mr. Douglas Silliman Monday 2/10/2017

His eminence with the American Ambassador discussed the developments in the security and political situation in Iraq and the region, the fight against terrorism and the victories achieved by the security forces in the last areas controlled by the terrorist, stressed on the unity of Iraq’s soil and people, arbitrating the Constitution and legal authorities to resolve the unsettled issues between Baghdad and Erbil, his eminence counted the Religious Authority’s call to relay on the Constitution and the federal court the best way to solve the issues, called to invest time and take the views of religious authority and listen to the size of the rejection shown by everyone against dividing Iraq.

His eminence reiterated his rejection to the policy of imposing the status quo, noted the importance of providing direct advice to the Kurdish leaders out of care and compassion for the Kurdish people who will bear the consequences of the referendum, pointed out that dialogue can only be after cancelling the referendum.

The American ambassador reiterated the position of the United States of America supporting the unity of Iraq, noted that his country sees the constitution and legal authorities as the best way to solve the problems, his country supports any solution to the crisis that comes through constitutional and legal contexts.