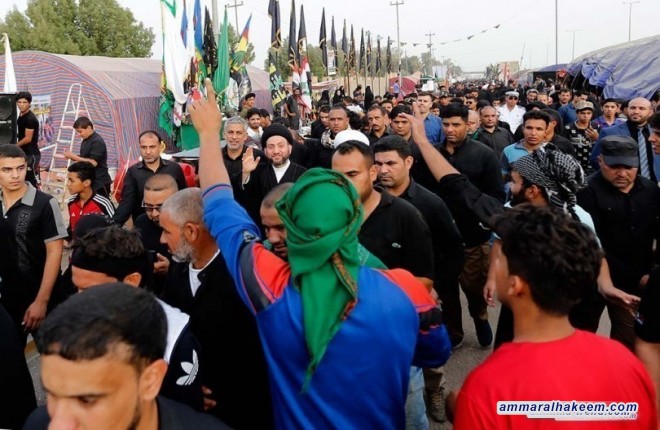 Head of the National Iraqi Alliance, Sayyid Ammar al-Hakim, participated with the people of Diwaniyah pilgrimage towards Karbala of Hussein (peace be upon him) Thursday, 1/11/2017
His eminence praised noticeable youth participation in the Arba'een (the fortieth of Imam) pilgrimage, called for adherence to the Hussein’s project and the approach Hussein and the principles which was the cause of Imam Hussein revolution. His eminence praised the generosity of Hussein shown by Iraq in the care of the pilgrims of Imam Hussein and provision of services along the route coming from various areas.

His eminence pointed out the presence of Hussein pilgrims arriving from abroad Iraq from various Arab and Islamic countries, this indicate that numbers are continuously increasing, and a proof that the Hussein revolution is international and its impact on everyone.