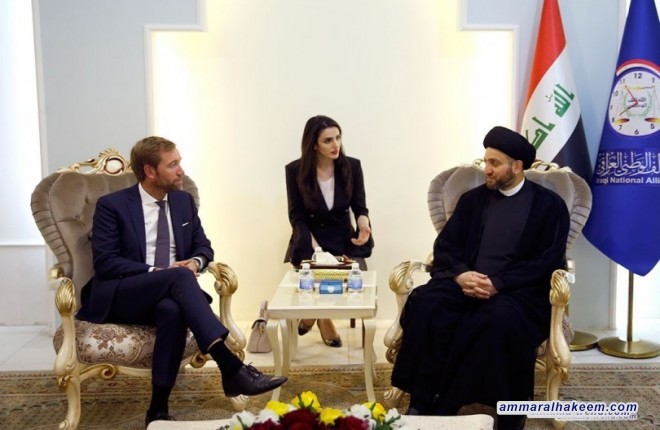 Head of the National Iraqi Alliance, Sayyid Ammar al-Hakim, in his office in Baghdad received a delegation and a Norwegian diplomat headed by representative of the Norwegian Foreign Ministry Mr. Knut Lein Sunday 12/11/2017
His eminence discussed with the Norwegian delegation the bilateral relations between Iraq and Norway and means of Norwegian contribution to the reconstruction of Iraq including cities liberated from Daesh and cities of liberators. His eminence stressed that confronting terrorism is not the battle of Iraqis alone, but they fought on behalf of the world and defeated terrorism that threatens everyone.
His eminence pointed to the success of Iraq in overcoming national unity challenge and prevailed over these challenges, pointed out that the Kurdish component in Iraq has been and will remain a key partner and that all problems are resolvable if there is a will to find a solution through constitutional and legal frameworks.
Sayyid Ammar al-Hakim stressed on making elections on schedule in order to open a new phase based on providing services and transforming the challenges into opportunities, plus building the best relations with the countries of the world and the region, also pointed out that the Al-Hikma National Movement is open to everyone and the interest of Iraq is the basis of relations with neighboring countries, indicating to the attendance of women and youth in the General Conference of the movement and offer young people an opportunity to serve the sons of their people by gaining leadership positions in the state of Iraq.