Sayyid Ammar al-Hakim stresses on holding elections on schedule, it is the most important pillars of the democratic system 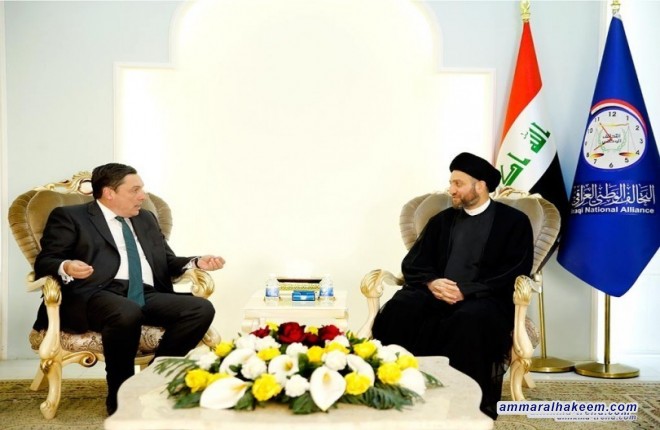 Head of the National Iraqi Alliance, Sayyid Ammar al-Hakim, met new Ambassador of the United Kingdom in Baghdad John Wilkes Thursday, 16/11/2017
His eminence stressed on holding of elections on schedule, it is the most important pillar of the democratic system, called for adherence to the constitutional scheduling to perform this practice, emphasized on the importance of exercising a high sense of national responsibility in dealing with and managing the recent political crisis with the Kurdistan region, called for investing positive work environment to strengthen state institutions in the next phase and enable the institutions to improve living and service status of the Iraqi citizen, pointed out the importance resettlement of displaced persons to their original areas and reconstruction the cities of sacrifices and cities of who offered sacrifice.
His eminence pointed out that the next phase differs from the previous phase, youth have a pivotal role in achieving stability and development in all fields