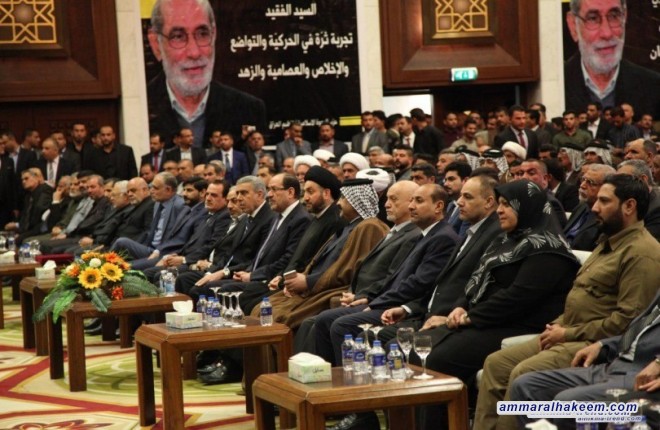 Head of the National Iraqi Alliance, Sayyid Ammar al-Hakim during the annual memorial of Sayyid Hashim al-Moussawi departure Saturday 18/11/2017 reiterated his call for a national front in support of Iraq's unity, stressed the need to hold elections on schedule, indicated that Iraq needs patriotic leaders in non-biased electoral lists that result in a national majority government.
His eminence called to legislate laws related to the elections, emphasized on the unity of Iraq’s soil land and people, and the reconstruction of liberated cities and the cities of the liberators. His eminence stressed to turn the military effort to a security effort and tasks dispersal to security forces , as the extremist ideology still exists, expressed rejecting to politicize the popular mobilization forces and involve these forces in a political conflict, his eminence also expressed his rejection to terrorism accusations towards popular mobilization forces, counted this accusations double standards under illogical pretexts.
Regarding the late Sayyid Moussawi, his eminence indicated Iraqi society need to biographies similar of the late Moussaoui, pointed out that Sayyid Moussawi is a rich character on social, intellectual and political levels.