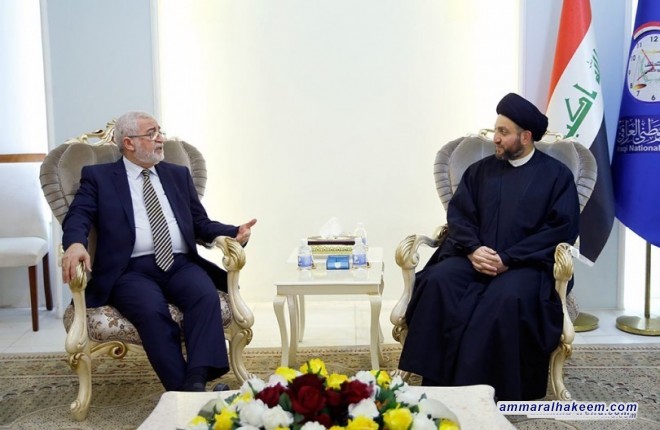 Head of the National Iraqi Alliance, Sayyid Ammar al-Hakim, in his Baghdad office received a delegation of the Iraqi Islamic Party headed by Mr. Ayad al-Samarra’I Sunday 19/11/2017
His eminence with the Islamic Party discussed developments of the political situation in Iraq and the phase post-victory over terrorist Daesh. His eminence stressed the importance of accompanying military victories with complementary and supporting political victories.
Regarding Iraq's unity, his eminence indicated that Iraq has passed a dangerous stage that threatened its unity, called for serious dialogue under the roof of the Constitution and law, pointed out that Iraq has the attention and respect of the world, this phase must be invested to rebuild liberated cities and cities of liberators and the resettlement of displaced families. His eminence stressed on holding the elections on schedule as being the most important proof of the democratic process in Iraq.