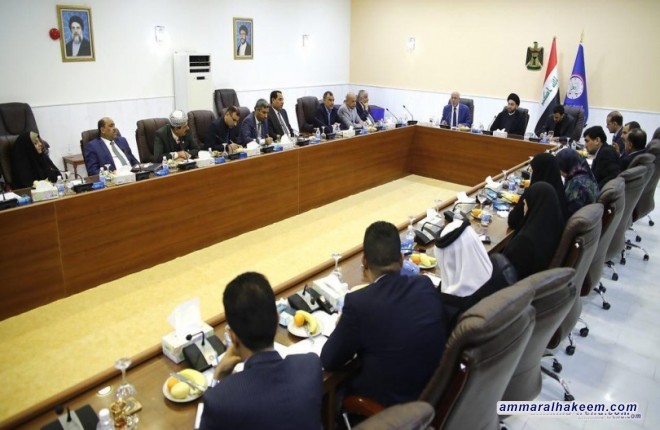 Head of the National Iraqi Alliance, Sayyid Ammar al-Hakim, in his office in Baghdad presided a meeting of Al-Hikma parliamentary and ministerial blocs Sunday 19/11/2017.
His eminence with the two blocs discussed developments of the political situation in Iraq and service aspects, passing key laws that would contribute to security and political stability, noted the importance of taking into account the developments of the current phase, being completely different from the previous stages.
His eminence emphasized on implementing proposed programs using the available resources and seek with other blocs to provide services to citizens, stressed the importance of prevailing in the services issues as one of the files that will a very pressing matter during the next phase after overcoming the military crisis, clearing the land from Daesh and the challenges of national unity, noted that the upcoming elections are critical in the history of modern Iraq, at that it must be held on the schedule set by the constitution.
Regarding the unity of Iraq and the plight that has been exceeded, his eminence emphasized on realization of rights in accordance with the Constitution and the laws in force, indicated the importance of internal political calmness so that Iraq can invest its strengths in restoring regional and international status as a player in all aspects in terms of being the most qualified to play the role of bridge between the rivals of the region.