Sayyid Ammar al-Hakim: Fair and transparent elections are a condition for building the state, and political powers should work on programs as basis for competition 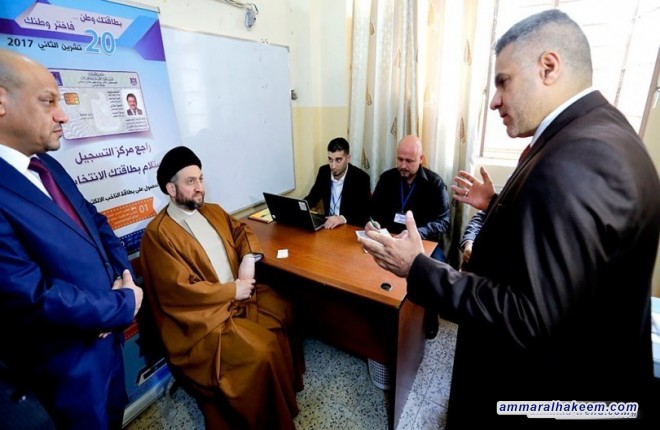 Head of the National Iraqi Alliance, Sayyid Ammar al-Hakim, in a speech during receiving voter card from the Electoral Commission Wednesday 22/11/2017 indicated that the fourth victory in building the state can be achieved in the event of succeeding in a national epic through elections that are fair, transparent and reassuring to all components, called for the need to pass election laws of provincial councils and Iraqi House of Representatives, stressed the need to make electoral competition based on electoral programs, called on citizens to instantly register their biometric registration and receive voter cards and to be prepared for the big epic, which is a turning point for a new political phase.
Sayyid Ammar al-Hakim indicated that Iraqi people today are living the glory of great military victories and a close declaration of an Iraq totally free of Daesh occupation, the political victory that maintained the unity of Iraq and ended division and fragmentation projects, which was recently crowned by the Federal Court decision, plus social victory through reduction of sectarian provocation, pointed out that Iraq today preparing for a fourth victory which is building the state as it is the most important priority in the upcoming phase, adding "The victory of the state means building institutions and professional and independent armed forces, fighting corruption, more empowering of young people and women in social life, reconstruction, services, employment opportunities, and all these are covered by the building of the state.”
His eminence considered the upcoming elections a launch of state-building phase, facing and overcoming the challenge, pointed out that the electoral process is a necessary introduction to achieve the great victory, called on citizens to immediately biometric registration and receive voter cards and prepare for the big epic which is a turning point for a new political phase.
His eminence urged the Independent High Electoral Commission and its new team to work and achieve a fair, transparent, neutral and clear electoral process that would reassures all Iraqis that their vote will be secured during this process, recommended to activate the project of accelerating results announcement so Iraqi people see results after few hours of the electoral process and to put an end to many suspicions of fraud and manipulation to voters’ votes.
Head of the National Iraqi Alliance emphasized on providing a security environment and resettle displaced to their cities to participate in the elections and restore stability in the liberated areas, provide financial allocations to the Commission to conduct elections and electoral process, called the Iraqi House of Representatives to enact the law of provincial council elections and the new law of the Iraqi House of Representatives or vote for the favor of previous law to be the law in force during the next phase if not agreed on the new law in order to open the way for the Commission to complete its work.
His eminence stressed that the political forces should strive to provide electoral programs that are consistent with the priority of building the state, to be realistic, calculated, clear and capable of giving hope and optimism to the citizens, urged media to come and actively create motivations for our people to participate in the electoral process, emphasized that competition should be based programs offered, competencies and energies that are provided to Iraqi people and not on the basis of sectarian and political escalation affiliations, escalations, discrediting, smearing and scandals.