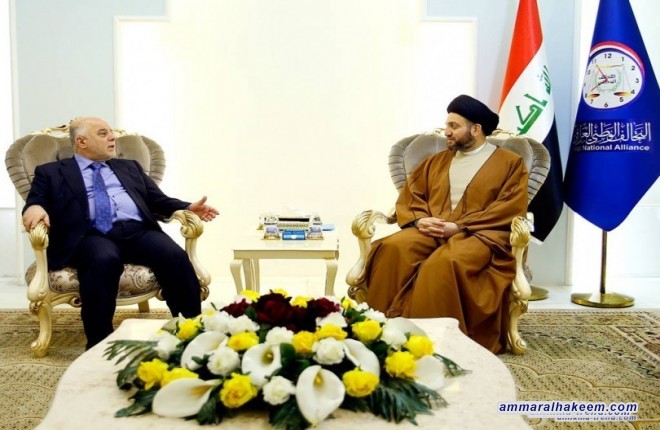 Head of the National Iraqi Alliance, Sayyid Ammar al-Hakim, in his office in Baghdad, received Prime Minister Mr. Haider al-Abadi Wednesday 22/11/2017
His eminence discussed the latest developments in the security and political situation, praised the efforts exerted by the government, security and military, the popular mobilization forces and all the supporting parties, which resulted in ending the military confrontation with terrorist Daesh, stressed the need to give attention to the security challenges created by Daesh to prove their existence through targeting civilians.
Regarding the referendum crisis, his eminence called to a deep and serious dialogue in accordance with the Constitution and the laws in force, called on all parties to abide by the directives of the religious authority, which called for adherence to the Constitution in text and spirit.
His eminence stressed the importance of victory in service aspects and combating corruption, as it is the most important issues that will face Iraq in the coming phase, stressed the need to develop mechanisms in providing services and providing job opportunities.
regarding the elections, his eminence with Mr. Abbadi discussed constitutional timeframes to hold elections, the government preparations and laws to be approved for this matter, stressed the need to adhere to the elections schedule as elections are the basis of electoral practice.