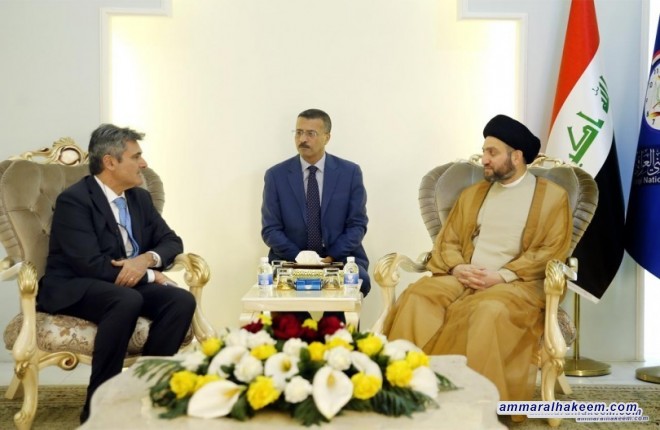 Head of the National Iraqi Alliance, Sayyid Ammar al-Hakim, in his office in Baghdad, received the Italian ambassador to Iraq Mr. Bruno Antonio Pascidou Thursday 23/11/2017
His eminence with Pascidou discussed the bilateral relations between Iraq and Italy, hoping that relations will witness further progress and success during the new ambassador's mission.
His eminence explained to the Italian ambassador that Iraq is recovering and regaining its unity and cohesion by the efforts and sacrifices of its sons and is heading to deracinate the extremist ideology in Iraq and work on reconstruction and the displaced families. His eminence pointed out that accumulation of positives paved the way for Iraq to regain its regional and international status, stressed that dialogue is the way to resolve the problems and complete the task of building Iraq, expressed support to any national or regional dialogue that contribute to the stability of Iraq or the stability of the region so the peoples enjoy security and safety.
Mr. Pascidou praised the sacrifices of Iraqis in the face of terrorism and in defense of Iraq, the region and the world, praised his eminence's position of in support of dialogue and launch national initiatives and unite the political parties for the unity of Iraq.