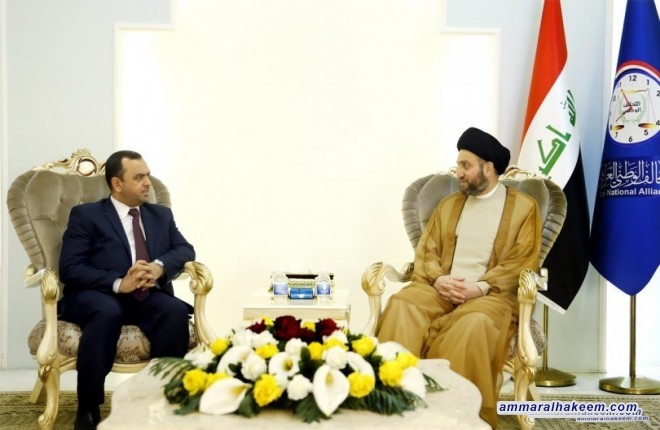 Head of the National Iraqi Alliance, Sayyid Ammar al-Hakim, his office in Baghdad received The delegation of the Al-Fadhelah Party headed by its Secretary-General Abdul Hussein al-Mousawi Thursday 23/11/2017.
His eminence discussed developments in the political situation in Iraq and the post-military victory over terrorist Daesh. His eminence emphasized that Iraq has won a military victory over Daesh and won unity challenges and there is a final challenge ahead which is winning the services challenge and fighting corruption.
His eminence indicated that dialogue is the best way to resolve the unsettled issues among all, stressed on the importance of invoking the Constitution, the law in force and the vision of the religious authority to abide by the Constitution’s text and spirit.
Regarding the upcoming elections, his eminence stressed that elections is very important and critical and must be held on schedule, called for competition on the basis of offered programs and services to citizens and go for a national majority attended by all Iraqi society components to create the state of a government and a opposition to offer the best.