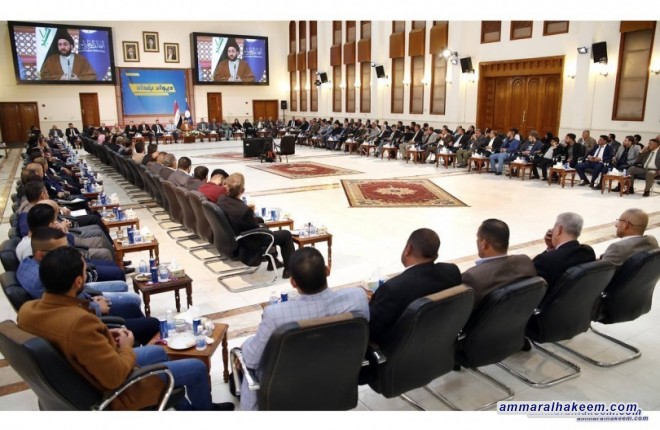 Head of the National Iraqi Alliance, Sayyid Ammar al-Hakim, in a speech at Dewan of Baghdad for elites and competencies Saturday 25/11/2017 stressed the need to downsize state institutions, support the private sector and find modern technical methods supported by known companies to combat corruption, reiterated his call for the necessity to find patriotic non-sectarian movements to find electoral lists that would lead to forming a national majority government.
His eminence indicated that the country will not progress by depending solely on governmental efforts, emphasizing the necessity of relying on private sector, downsizing the government and open the way for other sectors, stressed that the country needs to adopt a new style and approach to deal with the economic situation in the next phase after the victory over Daesh, especially that the state will devote itself to economic matters.
His eminence pointed to the necessity of confronting the corruption system that is trying to control the resources of the country, called for the establishment of global regulatory systems to confront corruption and the use of well-founded companies in order to control corruption, indicated that corrupt individuals are trying to foil projects and contracts that control and fight corruption.
His eminence added that the law leads to better results comparing to handling issues with violence and threats, stressed that Iraq has achieved a political victory and stepping away from the sectarian tone which was seeking electoral gains by intimidating citizens of each other, getting rid of this challenge and dismantle it, made who are utilizing sectarianism lose grassroots.
His eminence urged the need for a service victory to be added to the military, political and communal victories. This can only be achieved by leaving quotas, forming non-sectarian national movements and national electoral lists in order to be able of forming a national majority government, stressed the necessity of activating patriotic sense among Iraqis and that each Iraqi citizen feel is a citizen of the first degree.