Sayyid Ammar al-Hakim: The unity of Iraq needs constituents including strengthening the citizen's cohesion and adherence to his homeland through economic and development projects 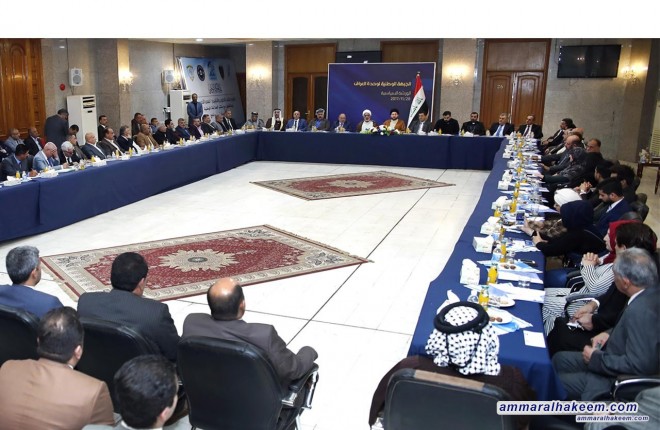 Head of the National Iraqi Alliance, Sayyid Ammar al-Hakim, in a speech to the political workshop of the National Front for the unity of Iraq Tuesday 28/11/2017 indicated that Iraq overcame challenges that faced its unity and crises became controlled by constitution and law, yet the unity of Iraq remains in need of political, economic and developmental constituents that make the citizen adhered to his country and project.

His eminence pointed out that these projects are the task of the political powers to find projects that provide services, employment opportunities and reconstruction, resettlement of displaced families and do justice to who offered sacrifices, noted that doors of the National Front is open to anyone believing in the unity of Iraq according to the aforementioned elements, and that the dialogue today between Baghdad and Erbil is important, yet we need a national dialogue between the Iraqi components.
His eminence pointed out that the next phase needs to talk about the details that affect the citizen and most importantly the services, emphasized on the fight against corruption, expressed support to the government, integrity administration and law in their effort to fight corruption, away from blame and accusations.