Sayyid Ammar al-Hakim: We need the approach of the prophet of Allah (pbuh) in dialogue to build Iraq, make development revolution and fight corruption 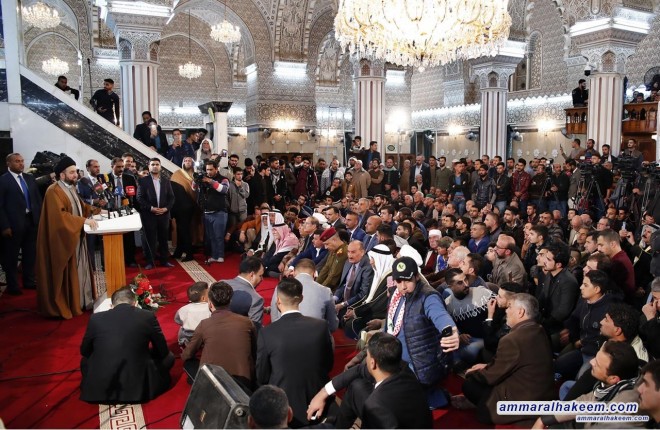 His eminence indicated that the challenges of Iraq that Iraq was able to overcome included sectarianism, terrorism and national unity, Iraq overcame all these challenges and turned them to opportunities through the patience of the people and the sacrifices that were offered.
His eminence, during his attendance to the ceremony marking the birth of the prophet held by the Sunni Endowment at the Great Imam Mosque in Adhamiyah area, called to learn lessons from the birth of prophet and not only show joy and celebrations, and people should follow the steps of the prophet of Allah approach when facing challenges, patience during hardness and faith in accordance with the size of project and challenges, bigger projects faces bigger challenges.
His eminence emphasized on the importance of dialogue, national settlement and spreading forgiveness and love among believers and show strength against anyone trying to target the country, indicated that the prophet of Allah (pbuh) was an example of a perfect human , and in spite of his position he remained humble and forgiving, he represented humanity through his character, approach and wisdom.

The ceremony included religious ceremonies, chants and unified prayer as an expression of the most important event that unify believers in a one country, attendees praised the presence of Sayyid Ammar al-Hakim in Adhamiyah for this type of occasions expressing the people unity and cohesion .