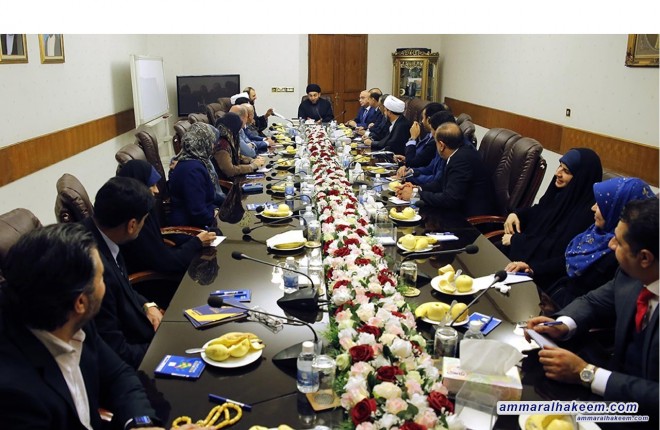 The elected Political Bureau of the Al-Hikma National Movement held its first meeting under the chairmanship of head of the National Iraqi Alliance, Sayyid Ammar al-Hakim, meeting took place at the office of his eminence Baghdad Saturday 2/12/2017.
Conferees discussed the outcomes of the General Founding Conference of the Al-Hikma National Movement, which resulted in the electing of the Head of the Movement, the General Authority and the Political Bureau, the practice was conducted in a transparent and democratic manner. His eminence commended the efforts exerted by everyone to make an outstanding conference considering the Iraqi political reality.
The conferees thanked the role played by the Independent Electoral Commission managing the election process, conferees agreed to open nomination for Secretary of the Political Bureau post, and assigned tasks to members, plus continuing coordination in the National Front for the unity of Iraq through the secretariat of the Front and discussed a number of movement issues, his eminence emphasized on the importance of paying attention to the twentieth attributes of the Al-Hikma National Movement and provide service to the Iraqi citizen.