Sayyid Ammar al-Hakim: The first victory over Daesh was made by the religious authority through the Fatwa which had changed the odds against the enemies 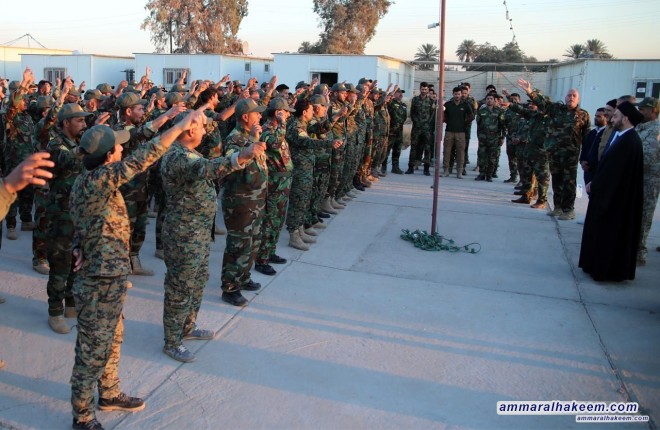 Head of the National Iraqi Alliance, Sayyid Ammar al-Hakim, met with fighters of Ali Al-Akbar Brigade, in Baghdad Saturday 3/12/2017, his eminence indicated The first victory over Daesh was made by the religious authority through the Fatwa of Sufficient Jihad which had changed the odds against Daesh and against who planned to use Daesh to make changes, pointed out that even Daesh admitted that this fatwa had destroyed their plans and made them defeated and lose their advancement, receding from the outskirts of Baghdad to Al-Qa’im area and the Syrian-Iraqi borders.

His eminence indicated that these sacrifices have achieved unprecedented military victory to reach areas that were not cleared during the past time and not even by the Americans, plus the political victories achieved in unity of Iraq that faced the challenges of unity, victories were the reason of re-establishing Iraq to its position, citing Iraq position in the regional and international circles, it is worth to mention suppressing sectarian strife when all of Iraq of all components contributed sacrificed to face Daesh.
His eminence pointed to the significance of the fatwa and the quick answer by the Iraqi society, pointed out that this response was an expression of masses’ integration with its leader and this is the most important elements of victory in any confrontation, indicated that Iraq has many challenges, including the security challenge where terrorism is trying to exploit any gap to permeate, yet the challenge of service and the reconstruction of liberated cities and cities of liberators remains the most important challenges of the next