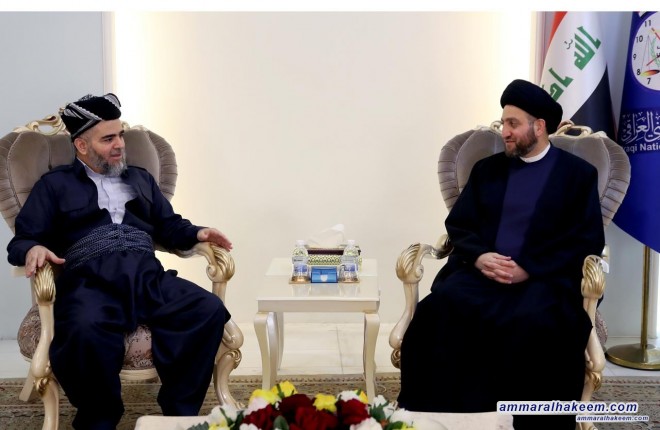 Head of the National Iraqi Alliance, Sayyid Ammar al-Hakim, in his office in Baghdad met with the Founder and Leader of Kurdistan Islamic Group, Mr. Ali Bapir Monday 4/12/2017.
His eminence stressed the importance of dialogue in accordance with the law and Constitution to resolve the problems between the federal government and the Kurdistan Regional Government of Iraq, called to commit to peaceful solutions from the premise that everyone is a winner, adherence to the letter and spirit of Constitution as expressed by the blessed Supreme Religious Authority.
His eminence indicated that Iraq is now the center of the world’s respect after Iraq was able to eliminate terrorism. His eminence pointed out that internal differences must be resolved in order for Iraq to enjoy its resources and be able to provide the most important services in the coming period, noted that the security challenge still exists as Daesh is attempting to compensate its defeat through conducting terrorist actions, this requires more unity in the face of challenges.
His eminence stressed that the solution is possible if there is a will to find solutions, pointed out the importance of invoking the public interest the Iraqi people at all levels, Iraqis have equal rights and obligations according to the constitutional text approved by vote by all.