Sayyid Ammar al-Hakim: Iraq exiting out of the UN Chapter VII, a new victory added to the victories of Iraq 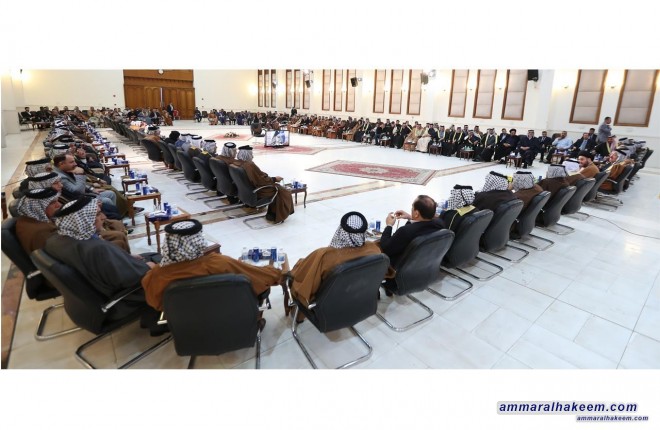 Head of the National Iraqi Alliance, Sayyid Ammar al-Hakim, at Dewan of Baghdad for elders and figures of the Iraqi tribes in his office in Baghdad Saturday 8/12/2017 , counted that Iraq becoming out of the UN Chapter VII a new victory added to the victories of Iraqis, victories on terrorism and complete defeat of Daesh, with exception of sleeping-cells and some terrorism ideologists, plus to Iraq's victory on the challenge faced national unity and the decrease of sectarianism, indicated that Iraq retaking full sovereignty was gained after Iraq had fulfilled all its obligations leaving no justifications of being under the UN Chapter VII, and before all this the sacrifices of Iraqis and the blood of martyrs, had the most prominent impact in the Iraq retaking its sovereignty, honor and dignity.
His eminence indicated that the final challenge facing Iraq is the challenge of services and building strong state, indicated that this challenge requires a vision, plan and synergized and efficient team, the leaders of the tribes and tribes’ elders are responsible for defining the competent and honest people who will carry the flag of the Al-Hikma National Movement, plus the importance of careful selection of people who can present services issues the next government priority, pointed out that the issue of services need to be correctly managed, citing the achievement made by oil sector and the youth and sports that are observed to everyone by facts and numbers, his eminence stressed the importance of the Iraqi Tribal Council provided that the council should be for the tribes and supported by the Iraqi state without imposing any authority or power over it.
His eminence talked about US recognizing Jerusalem as the capital of Israel and relocating the US embassy and stated “This is provokes Muslims and Christians all over the world," described this action as a "clear inimicality", and that reaching this the current situation is because of disintegration and internal conflicts in the Arab and Islamic world, expressed his wishes that Jerusalem issue would be an opportunity for Muslim and Arab nation to wake from what they are suffering. His eminence reiterated his condemnation and rejection of this step and urged to continue standing against it.