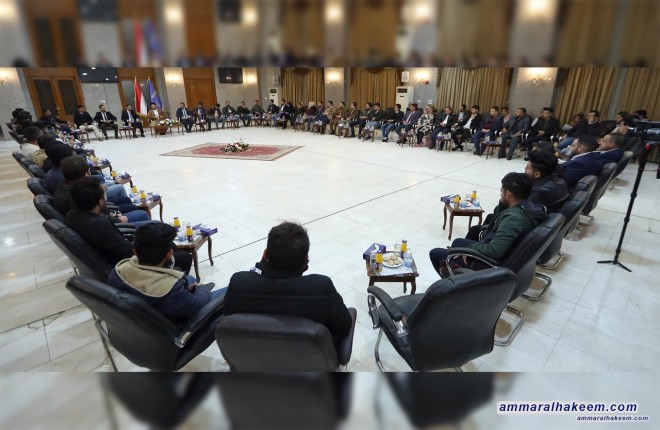 Head of the National Iraqi Alliance, Sayyid Ammar al-Hakim, received a group of Iraqi universities students at his office in Baghdad Monday 11/12/2017
Sayyid Ammar al-Hakim called for an active and influential presence of youth in the next phase as it is a phase of building, reconstruction and facing the service challenge, pointed to the importance of exiting the frustration and negative generalization condition, and to consider pros as basis of action, the most important of these pros are the victories achieved against terrorism and the announcement of the conclusive victory on Daesh, facing national unity challenge and finally Iraq being out from the Chapter IIV and restoring its sovereignty.
His eminence stressed the importance of caring for top students and benefiting from them in building Iraq, called for benefiting from nations experiences that succeeded in this challenge, pointed to the necessity of adopting standards that fit the Iraqi reality as well as elevating scientific level and restoring the level of Iraqi universities to where it was before the unreasonable wars that brought Iraq to this current situation.