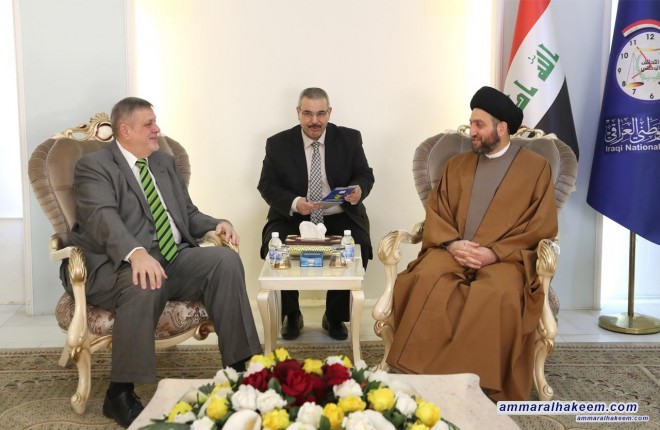 Head of the National Iraqi Alliance, Sayyid Ammar al-Hakim, in his office in Baghdad, received the representative of the Secretary-General of the United Nations, Mr. Jan Kubis Tuesday 12/12/2017

His eminence with Kubis discussed the developments of security, military and political situation in Iraq and the victories achieved on terrorist and the exiting Chapter IIV of the United Nations charter, noted that all victories would not have been possible without the sacrifices made by Iraqis on all levels.

His Eminence pointed out that Iraq has regained its sovereignty, honor and dignity and restored social cohesion among its people, pointed out that dialogue can solve the problems between all Iraqi parties provided that it is under the roof of the Constitution and the law. Regarding the upcoming elections, his eminence stressed to hold the elections on schedule, the elections is one of the most important proves of democratic practise, noted aiming to have national lists to achieve the government of national majority that include all components of Iraq people that will eliminate quotas, called on the United Nations and the international community to support Iraq in the reconstruction of liberated areas and the areas of the liberators.