Sayyid Ammar al-Hakim: The victories achieved by Iraq militarily and restoring sovereignty was achieved by the sacrifices of sons of Iraq 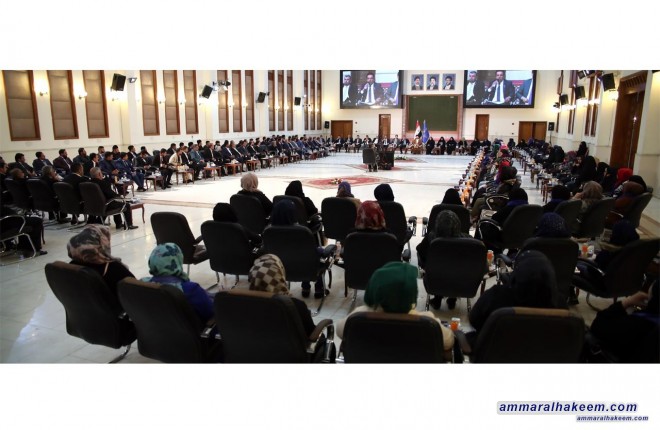 Head of the National Iraqi Alliance, Sayyid Ammar al-Hakim, met with a number of youth leaders in Rusafa district Baghdad Tuesday 12/12/2017. His eminence indicated that the victories achieved by Iraq; prevailing against Daesh in war, and decline of sectarian discourse in community levels, and exiting United Nation's Chapter VII achieving sovereignty, were accomplished by the sacrifices made by Iraq offering its children to reach this important stage, stressed on the importance of preserving these victories, because they were accomplished by blood, tears, and people who were survived by orphaned children, widows and grieving mothers.

His eminence emphasized that the next phase is the phase of enlightened and qualified youth who are able to shoulder the responsibility, stressed the importance of empowering young people, giving them roles and support. His eminence pointed to the success achieved by the Al-Hikma National Movement in the founding conference, where it presented a clear picture of transparent democratic practice with an impressive technical image using minimum resources.

His eminence called for confronting frustration and lack of trust between the society and the masses, stressed the importance of leaving the negative generalization as there are many successes that deserve to be noted, acknowledged and adopted as successful experiences in a difficult and complex reality.