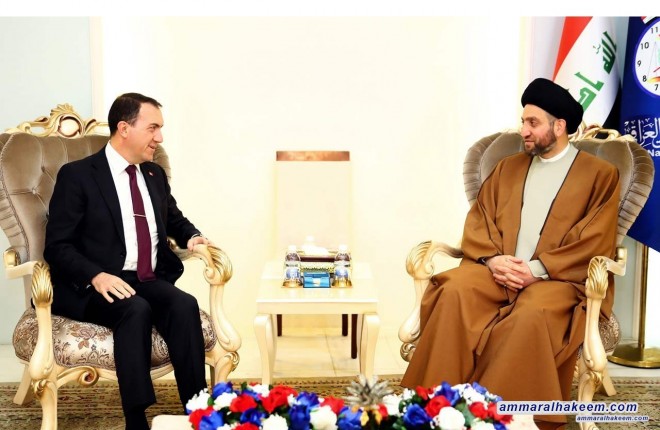 Head of the National Iraqi Alliance, Sayyid Ammar al-Hakim, in his office in Baghdad received the Ambassador of Turkey to Baghdad, Mr. Fatih Yildiz Monday 18/12/2017
His eminence called on Turkey to increase Tigris and Euphrates water levels to control water shortage and drought in central and southern Iraq in order to avoid the consequences of water shortage on livelihood and economic, noted that this issue is one of the cases that could contribute in a more positive relation between Iraq and Turkey.
His eminence stressed that Iraq is going through a new phase and urged Turkey to contribute actively in the support Iraq which needs comprehensive development and services provision and reconstruction, pointed out that the next stage needs to address the issues and communicate reassurance to all parties on the basis of citizenship and commitment to the Constitution, his eminence demanded serious dialogue on sound basis with Kurdistan Regional Government to provide a stable environment in Tuzkhurmato and to promote understanding between components in Kirkuk.
His eminence pointed to the importance of relations between the two sides and improve ties to serve the two countries. The Turkish ambassador congratulated his eminence marking the victories achieved by Iraqis, emphasized on his country's support for a stable, secure and united Iraq.