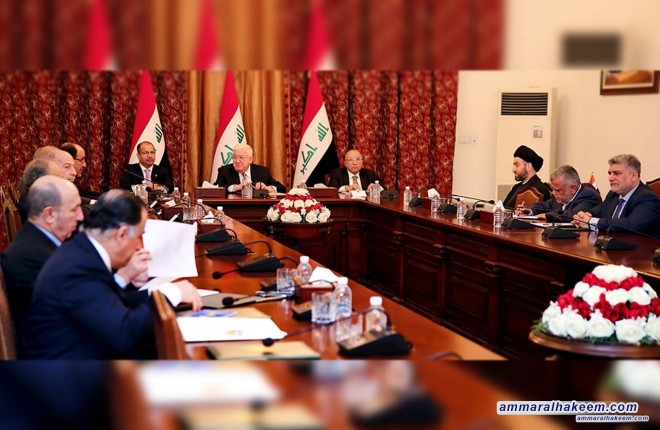 Head of the National Iraqi Alliance, Sayyid Ammar al-Hakim, stressed the government needs to speed up its plan to overcome the obstacles facing elections.
His eminence After the Meeting Of The Country Leaders at the headquarters of Presidency of the Republic pointed out to the general atmosphere towards holding of elections on schedule, indicated that the meeting discussed the obstacles and problems in liberated areas and the presence of displaced families and some problems in Kurdistan, and added that the decision of Council of Ministers took into consideration such problems, noting that Prime Minister did not attend the meeting, maybe due to an emergency, therefore the country leaders were not briefed of government plans and actions that are supposed to take place to address these problems.
His eminence indicated that country leaders are to get familiar with the government plan and to provide them with sufficient support by the parliamentary blocs and major political powers in the country to overcome the obstacles and perform elections on time, stressed that the elections is an opportunity and an important station for the participation of all the people.
Regarding the crisis between Baghdad and Erbil, his eminence stressed the importance of dialogue with the Kurdistan region because it is a basic issue, noted that there are commitments presented by the region towards the central government, and the central government also opens its arms and extends his hand for dialogue with the Kurdistan region to integrate roles in solving the problem.