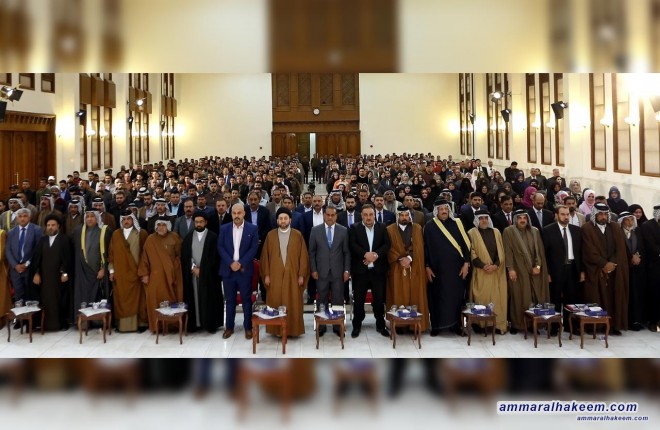 Head of the National Iraqi Alliance, Sayyid Ammar al-Hakim, attended the annual conference of Unified Iraq Movement Saturday, 23/12/2017, the Unified Iraq Movement announced joining Al-Hikma National Movement, Sayyid Ammar al-Hakim indicated that nowadays Iraq live the phase of the national project, pointed out that Iraq had put internal conflicts behind for it did not benefit the people, while benefiting the political figures who utilized provoking and escalation for electoral gain.
His eminence stressed that Iraq is capable of building a modern, strong and just state, citing some success stories achieved during austerity, indicated that the crisis of Iraq has never been a crisis in visions, opportunities, resources or location, but the crisis was a management crisis, a wise one able to turn potentials into reality for the Iraqi citizen.
His eminence pointed to the victories achieved by Iraq and called for maintaining them as they were achieved with the fatwa of religious authority and the blood of the martyrs, pointed out that the victories were military victories over the terrorist, and political victories over the challenges of national and social unity when Iraq confronted the attempts of division and sectarian and racial discourse, stressed that the last challenge is services and building a strong state, and Iraq will win, pointed to the importance of the unity of land, people, state and institutions so that the citizens have dignity and honor without discrimination.