Sayyid Ammar al-Hakim joins Christians during Christmas Mass Service: We are meeting this year, we are celebrating victory over Daesh, with a determination to build a state that cares for all 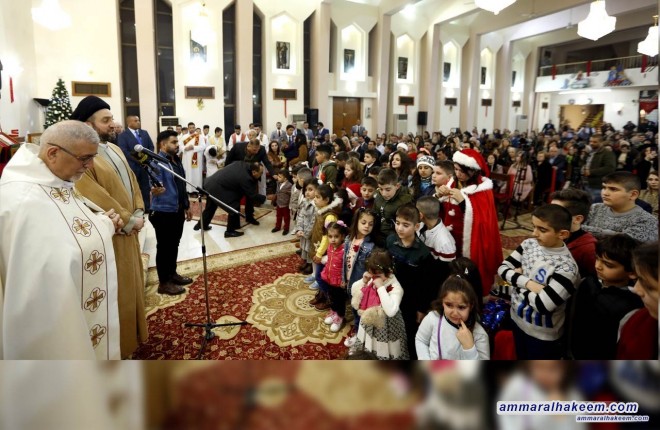 Head the National Iraqi Alliance, Sayyid Ammar al-Hakim, in a speech during Christmas Mass services at Our Lady of Salvation and Mar Youssef churches in Baghdad Sunday, 24/12/2017, stressed the ability of Iraqis to prevail building a strong state that cares of all components, similarly to Iraqis’ winning over Daesh terrorist groups, noted that the celebrating of the birth of Jesus (peace be upon him) is an enlightened step and an important pillar in the history of mankind.
His eminence indicated that celebrating the birth of one of greatest prophets, not only believed by Christians, but believed by the followers of all heavenly religions, Jesus Christ, the Son of Mary, " peace be upon him and upon Prophet Muhammad and the God of Peace" is an enlightened step and an important pillar in the history of mankind and the course of heavenly religions, and added ‘’ similar to this this day, last year, Iraqis felt joy and happiness for this blessed birth of this great prophet. Today we live multiple happiness and joy, the birth of Christ and the great victories achieved by the armed forces, the popular mobilization forces, the Peshmerga and the people who achieved great victory in the past year.
His eminence continued: on this night last year we had the same stand and asked Almighty God to achieve victory, and we meet again in another year, we celebrate victory and our liberated areas, especially in Nineveh Plains where our Christian people live, thank God we meet this year, a great victory has been achieved and the displaced families have an opportunity to return to their homes.
His eminence stressed that we are proud of the military victories over Daesh, the political victory in preserving the unity of Iraq, and the social victory in eliminating sectarianism and divergences, yet we are also preparing to face another challenge, the challenge of building a strong state that cares for all citizens regardless of their religious, sectarian, political and regional affiliation, a state that cares for citizens and provide them with services, integrity, transparency and strongly fight corruption, a country that builds good relations with region and world countries so that Iraqis can live in peace and harmony among themselves, stressed that this is a great challenge and the Iraqis are able to achieve victory as unity is achieved among them.