Sayyid Ammar Al-Hakim: We must win the fourth challenge, building a strong state and providing services 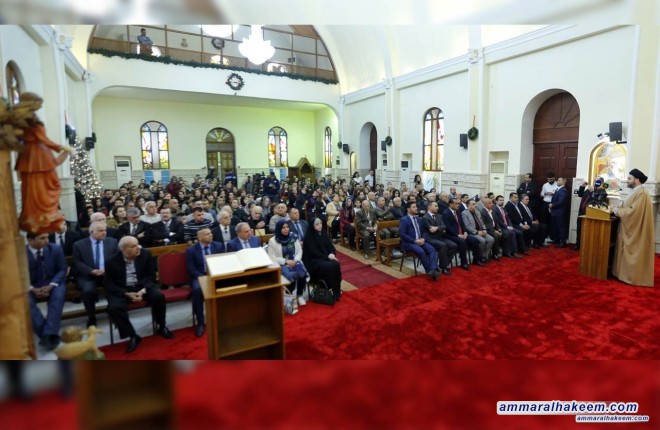 Head of the National Iraqi Alliance, Sayyid Ammar al-Hakim, in a number of Christmas services at number of churches in Baghdad Monday, 25/12/2017, emphasized that Iraq is facing the fourth challenge which is building the state and institutions and providing services and a good life for Iraqi citizens that commensurate with the profile and history of Iraq and Iraq’s potentials, wealth and roles, indicated that the fourth challenge after victory over terrorism, and over projects aimed to tear down the country, and over sectarian discourse need time for recovery, but Iraqis have no other option than succeeding this challenge by selecting the most efficient people to run the country within a vision and a coherent team capable of turning programs into reality.
His eminence, in a speech at the Chaldean Church of Mar Girgis in the Ghadir area, Baghdad, congratulated Christians throughout the world and in Iraq, marking the birth of Jesus Christ, indicated the high profile of this Prophet and the roles he played in carrying the divine missionary project which calls for justice, righteousness and peace. His eminence indicated that winning over Daesh on military levels does not mean the end of terrorism, there are extremist ideology and sleeper cells that must encountered through moderate thought and coexistence, prayed God to give Iraqis victory, and that in next year and next Christmas, Iraqis witness a progress in building the state and providing a decent life for the Iraqi citizen.