Sayyid Ammar al-Hakim to Sheikh Abdul latif Al-Hemyem : We emphasize the importance of strengthening schools of moderation, and that the resettlement of displaced families a national necessity 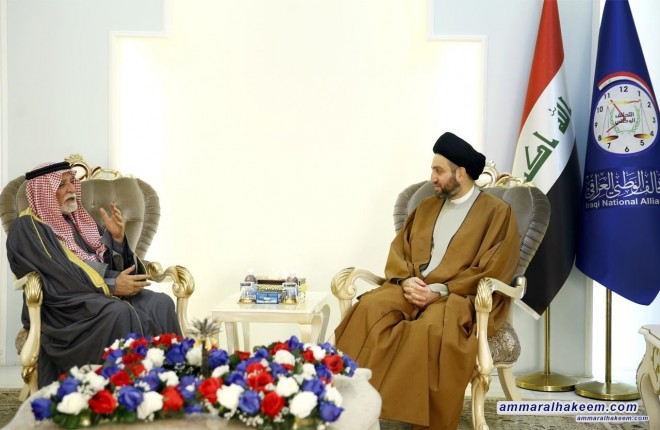 Head of the National Iraqi Alliance, Sayyid Ammar al-Hakim, in his Baghdad office received Head of the Sunni Endowment Sheikh Abdul latif Al-Hemyem Tuesday 26/12/2017. His eminence stressed the need to strengthen and support schools of moderation and fight extremist ideology, and called to make the resettlement of the displaced people to their areas a national necessity.
Both Sayyid Ammar al-Hakim and Sheikh Abdul latif Al-Hemyem affirmed the return of the displaced individuals to their areas and the recreation of political, security, service and social conditions for their return. His eminence indicated that convergence of vision on holding elections on schedule will achieve political stability.
Sayyid Ammar al-Hakim stressed that Iraqi House of Representatives needs to take its role in passing the decision on the date of elections approved by the government to hold the elections.
His eminence reiterated the importance of countering radical terrorist ideology trough promoting concepts of moderation and not allowing any ideology attempting to restore crises to Iraq and the region, pointed out that the national projects are the solution for the next phase and are capable of bolstering peaceful coexistence and protecting pluralism and peaceful transfer of power.
In another topic, his eminence pointed out that Jerusalem is an Islamic issue, was and remains the first cause for Muslims, and defending it is a sense of belonging to the Islamic world and a moral and humane principle, stressed the need to mobilize humanity and the Islamic world to do justice to this cause.