Sayyid Ammar al-Hakim: The tribes are one of Iraqi society pillars and are not to be violated 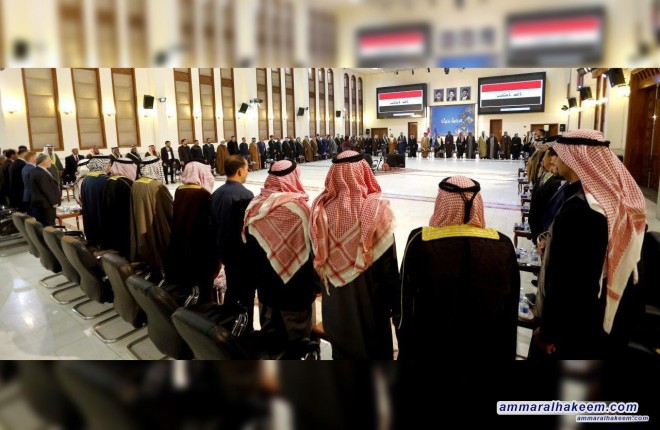 Head of the National Iraqi Alliance, Sayyid Ammar al-Hakim, met with a group of sheikhs and elders of Anza tribe Saturday, 30/12/2017
His eminence indicated that the tribe is a pillar of Iraqi society, are not to be violated, citing the roles played by the tribe in the protection of society after the fall of the regime until forming the new Iraqi state as well as their roles in mobilizing their members and urging them to respond to the religious authority call of sufficient jihad to defend the land and holy places.
His eminence praised the role Anza tribe, shouldered the Iraqi tribes the responsibility to promote harmony, acceptance and counter extremist ideology, indicated that Daesh ended on military level, yet terrorism still exists in its ideology and sleeping cells, confronting sleeping cells require restoring and supporting confidence between citizens and security services, noted that sectarianism in Iraq is political and does not exist in the community.
on political levels, Sayyid Ammar al-Hakim called on the Iraqi society to speak out and reject the postponing the elections, stressed that the military, political and societal victory need to be concluded with a fourth victory, namely victory in service provision and state building, and holding elections on schedule is an important portal to achieve the fourth victory.
Regarding the Al-Hikma National Movement, his eminence stressed that the movement is focused on the future and benefit from the past, stressed on provision of services, called for selecting the good and efficient to form a team capable of providing service and good management.