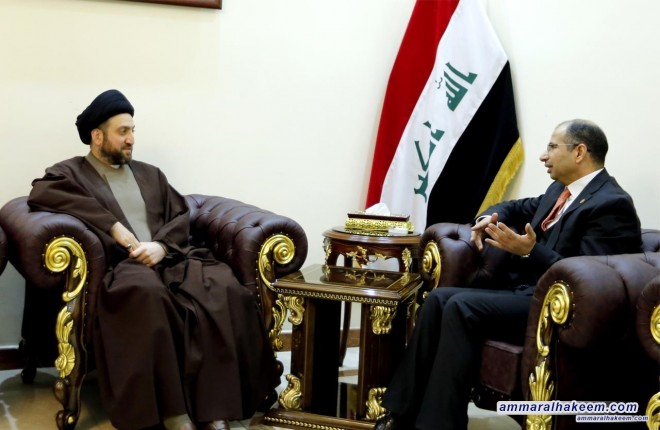 Head of the National Iraqi Alliance Sayyid Ammar al-Hakim, met with Speaker of the Council of Representatives Dr. Salim Al-Jabouri at the latter's office Wednesday 3/1/2018.
His eminence with Jabouri discussed the latest developments in the political and security situation, stressed the need to adhere to hold elections on schedule, and the Council of Representatives is responsible for approving the date of elections and to legislate the elections laws of the Council of Representatives and Provincial Councils as soon as possible so that the Independent High Electoral Commission is able to complete its procedure for the democratic practice, his eminence emphasized that the elections are to iterate the right to the Iraqi citizens to re-elect who they see fit to represent them.
His eminence called for passing the budget in order to protect the interests of the citizens, pointed to the importance of dialogue between Baghdad and Erbil within the constitutional framework as well as to devote efforts to consolidate national unity and social cohesion, indicated that the national settlement is a solution to all the problems, urged the government and concerned sides to strive for the resettlement of the displaced families to their cities and provide needed services to restore their life.