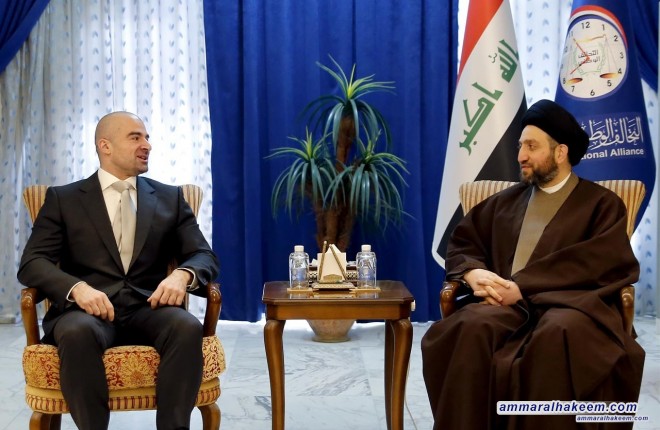 Head of the National Iraqi Alliance, Sayyid Ammar al-Hakim, in his office in Baghdad, received a leader of the Patriotic Union of Kurdistan, Mr. Bafel Talabani Thursday 4/1/2018
His eminence stressed the dialogue between the federal government and the Kurdistan Regional Government under the Constitution and the law, indicated that the problems can be resolved if there is a will and waiver in favor of homeland and citizen.
His eminence wished that the upcoming days witness a breakthrough in the crisis, emphasizing on unity of Iraq as a guarantor of everyone’s constitutional and legal rights, pointed out the importance of maintaining the victories achieved in the military, political and social levels, because theses victories were made by the sacrifices of the army, the police, the popular mobilization and counter-terrorism.
His eminence stressed the importance of social harmony and maintain it, and support the National Front for the sake of unity of Iraq, stressed the importance of holding elections on schedule as it is a constitutional right that is not to be skipped, wished the Patriotic Union of Kurdistan success in its upcoming general conference next year in March.