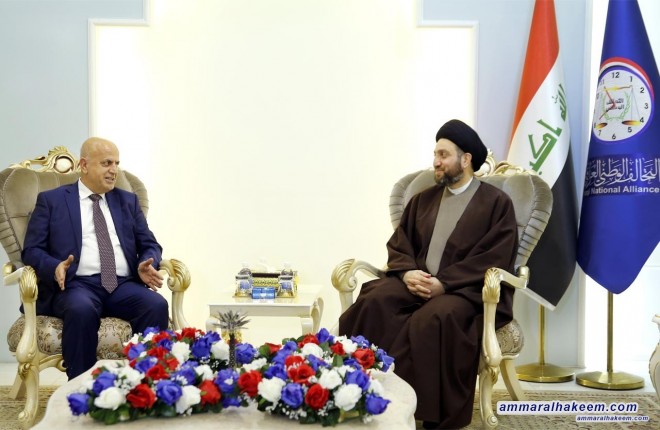 Head of the National Iraqi Alliance, Sayyid Ammar al-Hakim, in his office in Baghdad met with a delegation of Kurdish powers visiting Baghdad Thursday 4/1/2018
His eminence called for serious dialogue leading to a solution between the federal government and the Kurdistan Region, stressed on providing a ground for dialogue through the actions taken by the federal government as well as the Kurdistan Regional Government, stop media escalation and spread positive messages.
His eminence stressed the importance of allowing the federal government to exercise its role on the entire Iraqi soil, stressed on preservation of civil and community peace, especially in mixed areas, including Kirkuk and Tuzkhurmatu.
His eminence also stressed on holding election on schedule and finalize the budget for all provinces according to population ratios and technical handling away from politics according to the procedures of the Ministry of Planning, stressed on folding the page of referendum and adhere to the unity of Iraq, which proves day after day that it is the only guarantee for the rights of all.