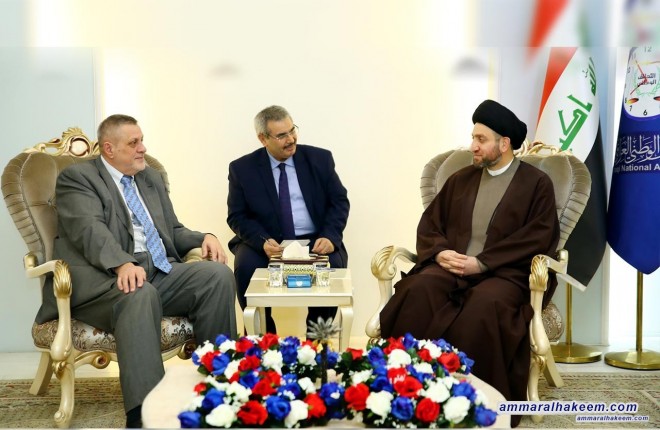 Head of the National Iraqi Alliance, Sayyid Ammar al-Hakim, in his office in Baghdad received the representative of the UN Secretary-General, Mr. Jan Kubis Monday 8/1/2018.
His eminence with Kubis discussed the positive developments in the political process, and the importance to reflect it on the Iraqi citizen and national concerns, plus covering holding elections on schedule, his eminence emphasized the importance of adherence to the constitutional schedule and iterate right to the Iraqi citizen to re-elect who they see most competent and equitable, called to invest the remaining time to address issues that may hinder the participation of voters on a wider scale. His eminence indicated that the alleged circumstances presented by some as an excuse to postpone elections give more justification to hold the elections on schedule, the recovery from all crises starts with citizens' electing the efficient team capable of overcoming the mistakes of the previous stage, indicated that 2018 will pave the way for new times and new phase. Regarding the dialogue with the Kurdistan region, his eminence indicated that dialogue is the only solution and can solve the problems under the roof of the Constitution and the law, stressed on the seriousness of dialogue and exit the phase of the referendum, welcomed the ongoing discussions to resolve the issues, emphasized on the unity of Iraq’s land and people as the only guarantee for the rights of the Iraqi people everywhere. His eminence praised the efforts of the United Nations in investigating and prosecution of crimes committed by Da'esh against Iraqis, emphasized on the importance to integrate efforts with the victories achieved by the Iraqi government.