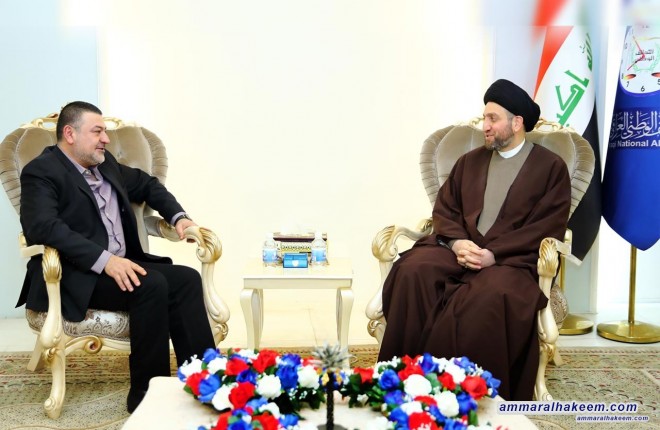 Head of the National Iraqi Alliance, Sayyid Ammar al-Hakim, in his office in Baghdad received Head of the Iraqi National Congress, Mr. Aras Habib Monday 8/1/2018
Both sides discussed the latest developments in the security and political situation and the upcoming phase, both sides stressed the importance of holding the elections on schedule and abide by the constitutional scheduling considering elections the most important proof of democratic systems. His eminence pointed out that the elections mean iterating the right to the Iraqi citizen to elect those who see them the most efficient for the next phase, stressed the need to form unbiased electoral lists in preparation for the formation a national majority government characterized of weight of components, indicated that Iraq has achieved victories at the military, political and societal levels that must be maintained. His eminence held everyone responsible for maintaining achievements, urged the Council of Representatives of Iraq to pass laws, including election laws related to the Council of Representatives and provincial councils so that the rest of the sections will be able to hold elections on time.