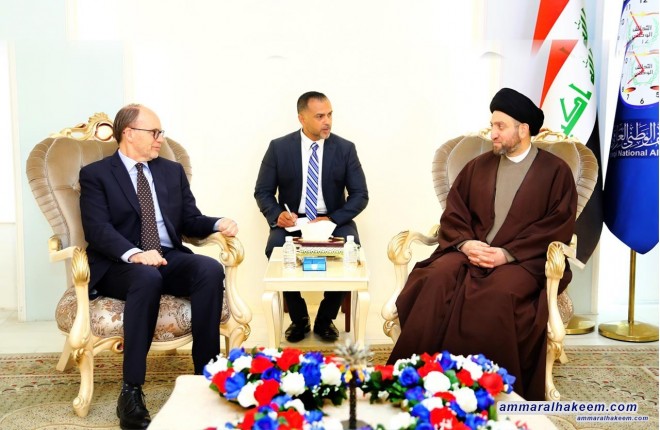 Head of the National Iraqi Alliance, Sayyid Ammar al-Hakim, received US Ambassador, Mr. Douglas Silliman Tuesday 9/1/2018
His eminence called to abide by the constitutional schedule for holding the elections and to complete the necessary requirements to encourage Iraqis to a nationwide participation in the elections, indicated the importance of resettling displaced families to their areas, guarantee electoral practice of the remaining people, and considered success of elections a cornerstone to anchoring the democratic system.
His eminence indicated that the dialogue represents the basis for addressing all problems with the Kurdistan Region, stressed his support for the measures of the federal government in addressing the problems of daily life of Iraqi people in the Kurdistan Region, especially on the subject of salaries, and called for more efforts to that end.
His eminence also pointed out that next phase will be the stage of state-building and service provision for the Iraqi people. The focus should be on achieving economic development and attracting investments, which will provide job opportunities and reconstruction of cities and urged for facilitations to investment measure.
His eminence pointed out that Iraq as part of the Middle East region is affected by developments in the Middle East, called for adopting dialogue and addressing problems away from provocation and escalation in order to serve the peoples of the region, their stability and progress.