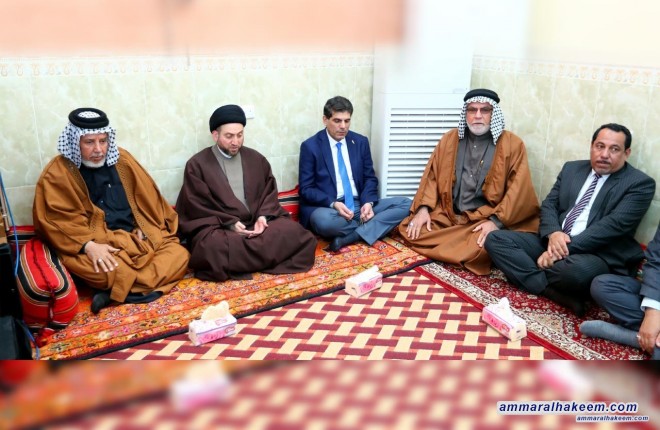 Head of the National Iraqi Alliance, Sayyid Ammar al-Hakim, visited a number of martyrs’ families during his visit to Basra province Wednesday 10/1/2018
His eminence stressed on care provision for martyrs and grant them privileges in work and schools and scholarships.
His eminence praised the role played by the people of Basra during the military confrontation with terrorist Daesh, pointed out that numbers shows high participation of Basra people including responders to the religious authority and the numbers of martyrs and wounded, his eminence commended martyr Ibrahim Johnny during a visit to his family, noted that Iraq is harvesting the fruits of patience thanks to sacrifices its sons.
His eminence in his travels in the province of Basra recited Surat Al-Fatihah for the martyrs, which their pictures adorned the streets of Basra, called for commemoration of martyrs through artworks, in curriculums and to start museums to show the world the size of what Iraq had offered in defense of its own homeland and on behalf of humanity and the world.