Sayyid Ammar al-Hakim: Justifications to deferment of services has ended and everyone should provide a safe environment for investment 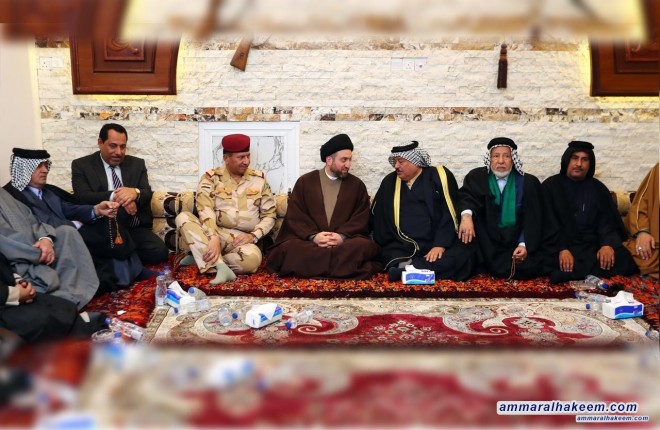 Head of the National Iraqi Alliance, Sayyid Ammar al-Hakim, in a speech during his tour to Basra province and visit the guest house of Sheikh Ahmed al-Bazouni Wednesday 10/1/2018, indicated that justifications to deferment and delay in providing services using the excuses of political process and fight against terrorism are not enough for the next phase and everyone are seek state building, called on the tribes to the necessity to provide a conducive environment for investment and the advancement of the country.
His eminence pointed out that the Iraqis have hard work in order to complete the victories through building a strong state that takes into account the law, take Iraq to the future where conducts are consistent with the law.
His eminence pointed out that weapons carried by people used in tribal disputes is not a feature to be proud of, and the strong state comes with a strong and cohesive society, and strong society is built with cohesive tribes and each tribe is a basic pillar, emphasized on Iraqi tribes to support the security and law, indicated that the overall character of tribes is commitment and discipline, but there must be a concerted efforts to circumvent cases of tribal conflict in Basra and Maysan, which has become a threat to people.