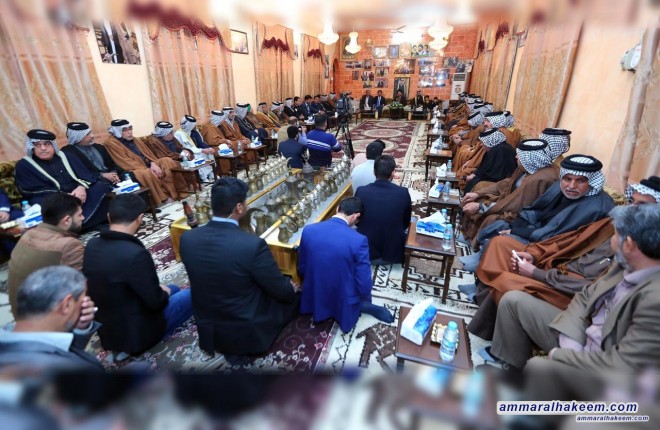 Head of the National Iraqi Alliance, Sayyid Ammar al-Hakim, counted the tribes an important pillar of building a strong state, stressed the need to assume their role in this regard and to control tribal conflicts and disputes.
His eminence during his visit to the province of Basra met with Sheikh Durgham al-Maliki in the divan of Bani Malik tribes in the province, his eminence commended Basra tribes’ stand in service of the country and contributions and important roles carried out by the Bani Malik tribe in the political and social level.
His eminence added that this visit is conducted in conjunction with the great victories achieved on Daesh terrorists made through the blood of the martyrs, the supreme religious authority and the stand and magnanimity of tribes’ sons, indicated that the war on Daesh will not end because the ideology of Daesh still exists, plus the remnants of wars and sleeping-cells, plus victory over sectarianism and division.
His eminence pointed out that the main battle in the next round is the building of the state and must give it priority, and to find country that provide services, corruption-free and respected by neighboring countries, a country that provides jobs and this is the greatest challenge.
His eminence emphasized that divans and hosting-houses of tribes are always a gathering point of Iraq components, the tribes should take their role, proper position and contribute in maintaining balance, control tribal disputes that had expanded and is threatening lives and impact businesses.