Sayyid Ammar al-Hakim: Patriotism means to consider the interests of the people and raise the slogan of Iraq First and To Iraq We Belong 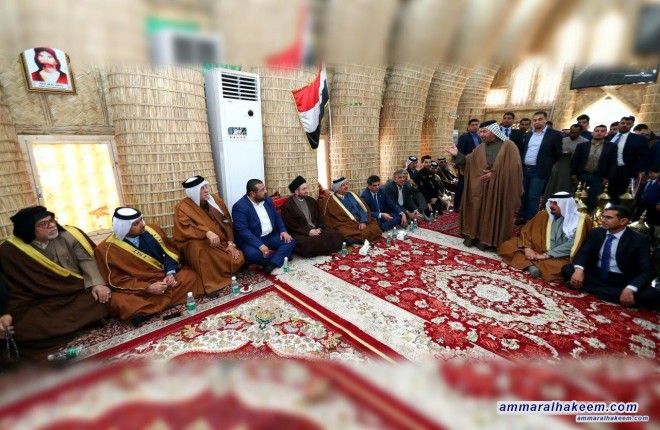 Head of the National Iraqi Alliance, Sayyid Ammar al-Hakim, met figures of Al-Sadah Al-Battat at Sayyid Sabah al-Battat host house Basra Thursday 11/1/2018
His eminence indicated that patriotism means considering the interests of the Iraqi people and raise the slogan of Iraq First and To Iraq We Belong, called to prioritize Iraqi interest over any other interest and to stand against any attempt to tug Iraq in wars on behalf of others under the pretext of eastern gate or Western gate, stressed to adopt an Iraqi policy to build the state basing on the Iraqi interest.
His eminence indicated that wars, past sanctions against Iraq and the fight against Daesh had devoured a lot of opportunities while others progressed and prospered, and the victories achieved at the military, political and social levels remain incomplete unless bolstered by the most important victory, the victory in building the state and institutions and providing services to the Iraqi citizen,
his eminence praised the sacrifices made by Basra in facing dictatorship, the nemours number of martyrs and sacrifices made by Basra facing Daesh, Basra where highest in number of respondents to the call of the blessed Religious Authority.
Regarding tribal aspects, his eminence called on the Iraqi tribes to address tribal conflicts that are threatening security, economy and society of the city, urged Iraqi tribes to take the initiative in solving these issues and not to wait for government measures, stressed to make final solutions to prevent the use of force and victimizing innocents by mistakes made by others.