Sayyid Ammar al-Hakim: Iraq is in front of a fourth challenge, the challenge of building the state and institutions 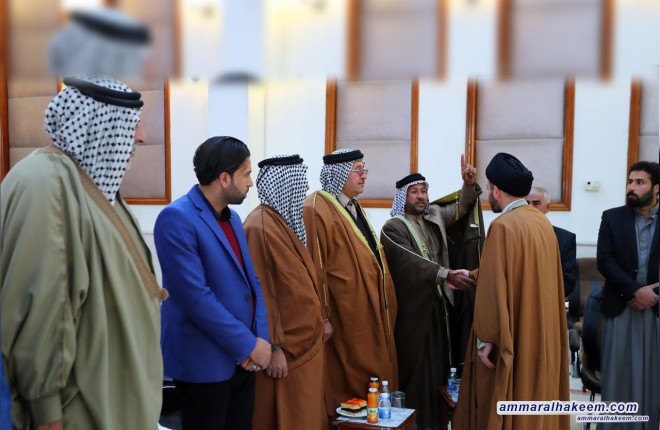 Head of the National Iraqi Alliance, Sayyid Ammar al-Hakim, met a group of Mada'in district's tribal Sheikhs and figures 13/1/2018
‎His eminence indicated that Iraq is in front of a fourth challenge after succeeding in the military challenge and eliminated Daesh, and in the political challenge that maintained national unity, and in the social challenge that eradicated sectarianism, pointed out that the fourth challenge is building the state and institutions, noted that the fourth challenge needs the vision, plan and a competent team, and before all this a wise selection made by the Iraqi voter.
His eminence indicated that 2018 elections are no less important than the 2005 elections, expressed his conviction that the elections will represent a transition for Iraq from chaos to stability, stressed the renovating discourse, real representation of society and presence of youth in commensurate with thier size compared to the population.
His eminence expressed his conviction that the community will not accept sectarian discourse one more time and will punish all those who provoke sectarianism, affirmed that it is a political sectarianism and not a community sectarian , pointed out that the roles that Iraq is able to perform will reposition Iraq to its international and regional status.