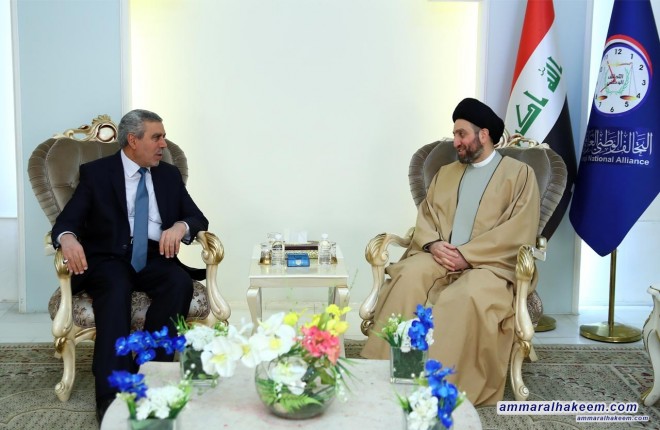 Head of the National Iraqi Alliance, Sayyid Ammar al-Hakim, in his office in Baghdad received Dr. Khudair al-Khuzaie, secretary-general of the Islamic Dawa Party of Iraq, January 15, 2018
His eminence with Khuzaie discussed the latest political and security situation in Iraq and the challenges of the current phase. Both sides stressed the importance of bolstering the military, political and societal victories with service and development victories. His eminence stressed the need to hold elections on schedule and that election campaigns of political powers are based on competing to provide service programs that is characterized of being clear and to not practice defamation and projection campaigns.
Regarding politicall aspects, both sides agreed on the necessity to pass critical laws including elections and public budget laws, and to invest the remainder of the Iraqi Representatives Council current tenure, as well as providing the atmosphere for the resettlement of displaced families to their cities and work to solve this issue.