Sayyid Ammar al-Hakim to the European Institute of Peace .. Building a state of institutions is the foundation for stability of Iraq 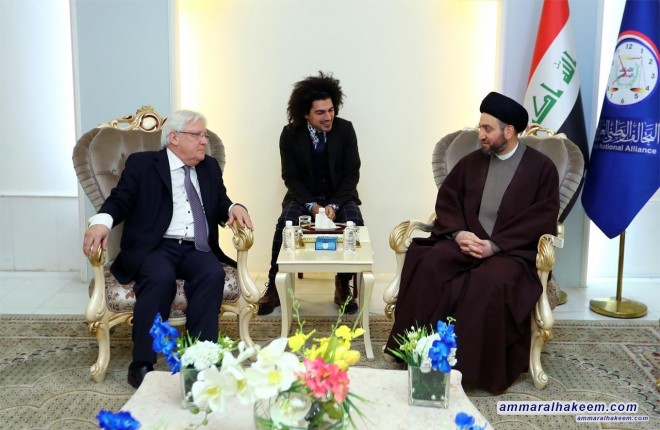 Head of the National Iraqi Alliance, Sayyid Ammar al-Hakim, received European Institute of Peace. His eminence called on the international community to shoulder its responsibilities towards Iraq considering that Iraq fought on behalf of the world, pointed out that the support is not limited to confrontation with terrorism, the stability of Iraq is linked to its success in the fourth challenge, the challenge of building the state, institutions and services otherwise all victories are incomplete.
His eminence commended European Institute of Peace efforts in establishing peace, and praised the development of relations between Iraq and the European Union, and the importance of developing relations. His eminence wished to see qualitative breakthroughs in relations at cultural and developmental levels and also in security levels during the post-Daesh phase.
His eminence pointed out that Iraq is a diverse country and its diversity is the source of its strength, pointed out that the most important achievement of Iraq is the social victory, rejecting sectarianism and enhancing the sense of national identity, stressed the importance of moving ahead to build Iraq on basis of openness to all and the interest of Iraq and to become a bridge of communication between teams and rivals.