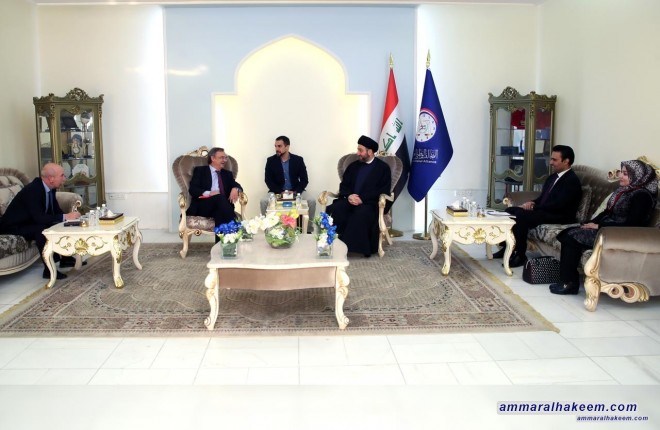 Head of the National Iraqi Alliance, Sayyid Ammar al-Hakim, in his office in Baghdad received the Spanish Ambassador to Iraq Mr. Juan Jose Escobar Wednesday 17/1/2018
His eminence with Escobar discussed the relations of Iraq and Spain and the international support required for Iraq in the post-Daesh phase, his eminence commended the growing relations that falls in the interests of the two countries and peoples, stressed that the new Iraq is open to everyone and became stronger by the unity of its sons and soil.
His eminence stressed the necessity of Iraq's success and victory in the challenge of building the state, institutions and service provision, pointed out that the strong, cohesive and united Iraq is the platform for the stability of the region and the world. Iraq is in the heart of the Middle East and the Middle East is in the center of the world. His eminence reiterated his call to Iraqi security to take highest levels of vigilance and precautions, modernize mechanisms and plans to face the security challenge, praised the security effort exerted, which foiled many attempts.
Mr. Escobar praised the victories achieved by Iraq against terrorism. Mr. Escobar expressed his condolences to the Iraqi people for Al-Tayaran Square bombing, and indicated continued support of Spain to Iraq.