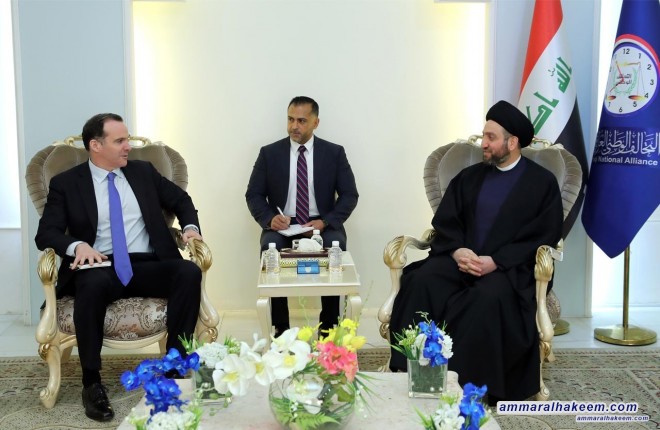 Head of the National Iraqi Alliance, Sayyid Ammar al-Hakim, in his office in Baghdad received the envoy of the American President of the International Coalition Against Terrorism Mr. Brett McGurk, US ambassador to Baghdad Mr. Douglas Silliman and Deputy Assistant Secretary of State Wednesday, January 17, 2018
His eminence with McGurk discussed elections and its constitutional statement, plus covering development of counter-terrorism after defeating Daesh, the meeting also conferred the negotiations between Baghdad and Erbil and the resulting positive indicators.
His eminence stressed the importance of holding elections on schedule, it is an important opportunity for the Iraqi people to start a new phase following the victories, the priority is to build state institutions, achieve stability and economic development, noted that national approach is a feature presented in the political alliances, which is encouraging to exit sectarianism in the next phase.
The two sides discussed the developments in the Iraqi security situation. His eminence stressed the importance of completing the military victory over Daesh with security measures that would eliminate security breaches, citing the recent Baghdad bombings, warned of complacency with terrorism considering that terrorism exists as an ideology threatening everyone.
Regarding the Baghdad and Erbil relations, his eminence called for investing the positive atmosphere in support of dialogue between the Baghdad and Erbil, and continued efforts to address the problems that the Kurdish people suffer. His eminence urged for concerted national and international efforts to support Iraq in the process of reconstruction and launch of economic development, reiterated the call for dialogue and regional understandings to solve the problems in the region sighting the positive impact of dialogue for Iraq and the peoples of the region.
Mr. McGurk emphasized US support for Iraq in its war against Daesh and encourage countries of the region to open up to Iraq, praised the efforts made by Iraq in the face of Daesh terrorism.