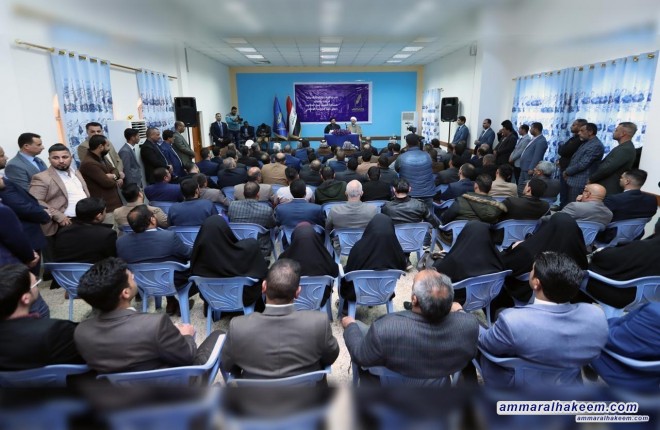 Sayyid Ammar al-Hakim met with the elite and competencies of Diwaniya province Wednesday 17/1/201
His called for combating corruption through technical methods and implementing real procedures, pointed out that the first tools of fighting both financial and administrative corruption starts with anti-bureaucracy measures, addressing administrative deliberateness and brutal routine, pointed out the need to close the legal gaps that are used by the corrupt as backdoors, called to primarily condemn and expose the corrupt by any means possible.
His eminence praised the role played by the people of Diwaniyah in the battle against dictatorship and the when establishing the state after the fall of the former regime, and in countering Daesh terrorism, the pictures of martyrs that adorn the streets of the city are an evidence of the status of Diwaniya and its influence and impact in the Iraqi realism. His eminence covered Iraq situations in the post-Daesh phase, emphasized on the importance of victory in the fourth challenge, the challenge of building the state and institutions and providing services in order to be the culmination of the three previously achieved victories; the winning the military challenge by defeating terrorist Daesh, and the political challenge by opposing advocates of division and separation plus the community victory and rejecting sectarianism. His eminence explained the roles played leading to these victories, first of all the blessed religious authority fatwa, secondly the wise and calm actions in which restored ÷Iraq to its place and preserved its unity.
His eminence pointed to the importance of building a state of institutions that cares for all its citizens through legal stature and without discrimination, empowering professionals and providing the right environment to attract investments, expressed confidence in Iraq's success in the fourth challenge, although it seems difficult at the moment, “yet all challenges are hard at first, but winning and succeeding is a must”.
His eminence called for investing Iraq’s opportunities to shift from chaos to stability, stressed that the elections should be held on its scheduled date, defined the bases of building the state by having a plan, faith, and capable efficient team, stressed the importance of producing the national majority government to form the pro-government and the opposition in the Council of Representatives and in local governments.