Meeting with the elders and tribal figures of Al Yasar at Sheikh chaffat al-Yasiri host house .. Sayyid Ammar al-Hakim: Iraq in on brink of a promising future if opportunities are well invested 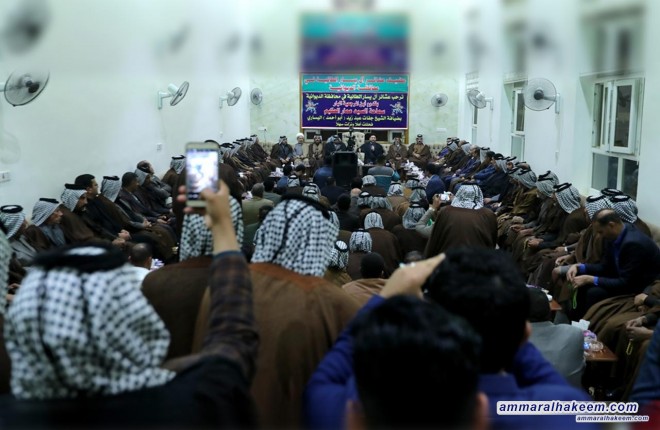 Head of the National Iraqi Alliance, Sayyid Ammar al-Hakim, indicated that the future of Iraq is promising in regards of folding the military page with terrorist Daesh, the societal stability, and above all the world's interest and respect to Iraq, called for investing opportunities aiming for the well-being and development of the Iraqi people.
His Eminence met with elders and tribal figures of the Al Yasar tribe of Al Ta’I tribe, praised the efforts of the elders and tribal figures of Diwaniyah and the eternal relationship between them and the religious authority, and their remarkable stands in the challenges and during important turning points experienced by Iraq, indicated that the image of Iraq externally is different from its image from within Iraq, the world looks at a country that faced all challenges and came out victorious over the most brutal terrorist group known in history and in a record time compared to the timeframes planned by the world’s superpowers to eliminate Daesh.
His Eminence pointed out that the Iraqi victory in national unity challenge is an important victory, plus the military and societal victory, and that the victories are mainly the victories of the people who took a stand and confronted, and the victory of the religious authority that identified the danger and mobilized the people with their fatwa, and the victory of the masses and youth people who were ready to face the challenges.
His eminence reiterated emphasis the fourth challenge that seems difficult the moment, yet winning it is inevitable, the fourth challenge; the challenge of building the state and providing services, and added “but building the state needs a plan, vision and a capable and efficient team.’’