Meeting with Al-Jubour tribes of Diwaniya .. Sayyid Ammar al-Hakim calls to elect the most capable and proficient in investing Iraq’s resources to build a state of institutions 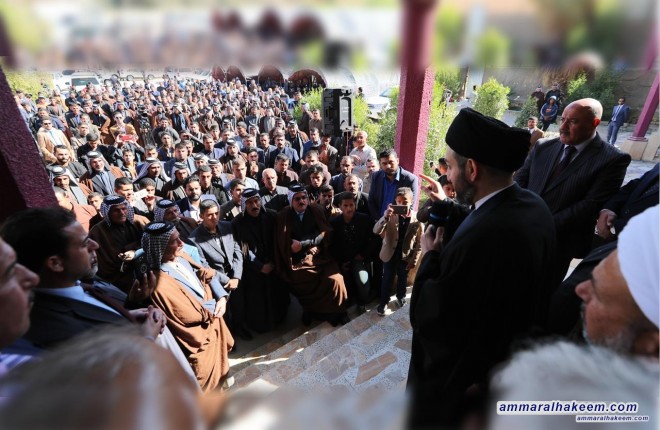 Head of the National Iraqi Alliance, Sayyid Ammar al-Hakim, met with the tribes of Al-Jubour in the host house of Sheikh Ghazi Al Abdan al-Jubouri in Diwaniyah Thursday 18/1/2018
His eminence called to make the good choice and trust team’s most efficient and capable members of investing resources of Iraq in achieving the state of institutions, indicated that every this is obvious and clear now and achievements are backed with numbers and facts, so there is nothing hidden to anyone. His eminence praised the tribes of Jubour over the course of Iraq's modern history since the 1920’s revolution and the fight against dictatorship and terrorism and Daesh, commended Jubour tribe sons who joined various security agencies including army, police and popular mobilization forces. His eminence emphasized to exit Iraq from the cycle of chaos, conflicts and wars, which stretched for more than fifty years, depleted all resources of the country and result in Iraq backwardness in many aspects, including agriculture and solving water scarcity.
Sayyid Ammar al-Hakim stressed that Iraq is before a different phase, and has become the focus of world’s attention and respect, after defeating Daesh on battlefield, and after victory over the sectarian conflicts, and political victory preserving the unity of Iraq, stressed on “victory in building the state even if that seemed difficult at the moment, every challenge started hard until we overcame it by our will and our unity”.