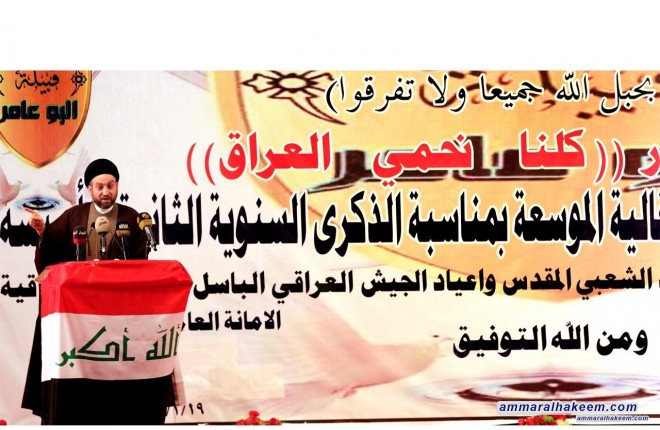 Head of the National Iraqi Alliance, Sayyid Ammar al-Hakim, attended celebration ceremony of victory over Daesh organized by the Albu Amir tribe Friday 19/1/2018
His eminence indicated that holding elections on the scheduled date and commitment to constitutional timing is one of the most important factors in mainlining the victory for which Iraq has made great sacrifices, called for honesty and competing on the basis of electoral programs.
His eminence stressed that the preservation of victory may be greater than the victory itself, noted the importance analyze the bombings of the Al-Tayaran Square and the Adan Square and the need to intensify the intelligence effort, and update security plans in accordance with the vision of a long-term strategy that encounter sleeping-cells, apply pressure on terrorism and reduce pressure on the citizen, his eminence considered that the current time is very appropriate to go to the national settlement to end the crises of Iraq.
His eminence called for resettlement of displaced families and the reconstruction of the cities, whether it is liberated cities or the cities of liberators who offered blood and devoted all their financial and logistical resources for the reconstruction of the cities, stressed apply equity with displaced persons whether they are Shabak or Turkman and other components of Talafar, Ninawa plains or of Salah Al din and Jurf Al Nasr areas. His eminence urged everyone to assume their responsibilities, including the Iraqi tribes in the fight against extremist ideology, indicated that Daesh ended on military level, but it remains present as an extremist ideology. His eminence praised the role played by the tribe of Albu Amir in the fight against the dictatorial regime and against terrorism of all kinds, reminded the sacrifices of martyrs especially the martyr Sheikh Dhari al-Fayad, mercy of Allah be upon him.