With a Kuwaiti media delegation .. Sayyid Ammar al-Hakim: the upcoming elections will produce a national majority government and opposition 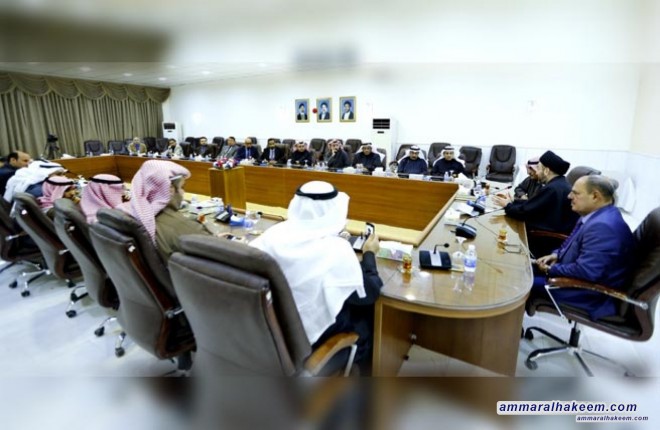 Head of the National Iraqi Alliance, Sayid Ammar al-Hakim, recieved a Kuwaiti media delegation Saturday 20/1/2018 His eminence indicated that the upcoming elections are important and crucial and no less important than the 2005 elections that established the democratic system in the country, and that the "elections" will shift Iraq from instability to stability, expressed satisfaction with the alliances formed as it will establish the government of the national majority and the national opposition in which will end of the phenomenon of everyone being involved with the government yet everyone evades his obligations to the public.
His eminence commended the development of Iraqi-Kuwaiti relations and Kuwait's support for Iraq, considered Kuwait's hosting the Iraq donors conference next month a proof to the depth of this relation and keenness to its sustainbility, and appreciated the position of the Amir of Kuwait towards Iraq in opposing dictatorship, confronting terrorism and in the reconstruction of Iraq.
On the Iraqi reality, his eminence reiterated his assertion on the importance of Iraq's victory in the fourth challenge, the challenge of building a state of institutions and services to be a culmination of political, military and community victories, and added, " Daesh still present as an ideology and this require the efforts of everyone to fight it.” His eminence emphasized that dialogue with Kurdistan is the only solution that guarantees the rights of all according to the constitution and equal right and duty.
Sayyid Ammar al-Hakim expressed his optimism of swift accomplishments to win in the fourth challenge provided that the Iraqi voter improves his electoral selection for an efficient team working on realistic vision, plans and programs, pointed out that the Al-Hikma National Movement emerged in response to the challenges and requirements of the current phase, it is a youth movement works to empower women by giving them a quota in leadership and a national movement being cross-component.