Sayyid Ammar al-Hakim: Building the state is achieved by creating an efficient team that has vision and policies 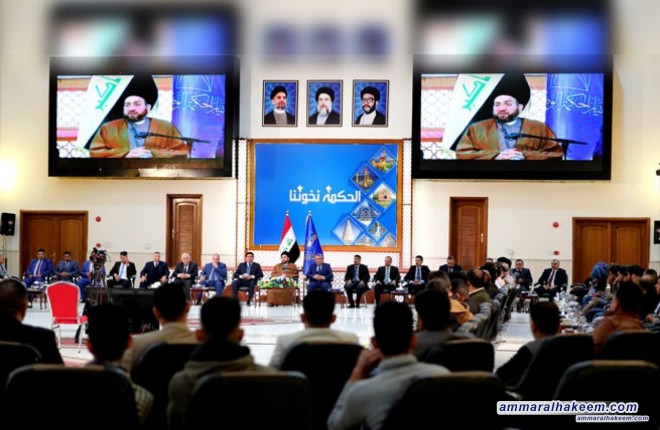 Head of the National Alliance, Sayyid Ammar al-Hakim, at his office in Baghdad met with a group of elites and competencies Saturday January 20, 2018
His eminence indicated that possibility of creating a strong state that provides prosperity, stability, services and employment opportunities is linked to selecting a team that has the vision, policies, plans and priorities for these matters. His eminence called to achieve social justice and have a high sense of responsibility to deliver rights for all and in all provinces of Iraq without exceptions. His eminence considered sectarianism the greatest danger that Iraq encountered and the access point exploited and stimulated by the enemies of Iraq to create strife among the people of one country. Adding “but the people firmly and wisely quarantined sectarianism” citing the proposed national projects that include different components of Iraq.
His eminence stressed that Iraq has defeated Daesh on military level, won challenges facing the national unity on political level, and overcame sectarian and narrow tendencies challenges on the societal level, pointed out that all the victories achieved were thought to be impossible at first and need decades of time to be resolved, but the Iraqis overcame all these challenges with great diligence and trust in God , pointed that the challenge of building the state also seems difficult but possible if handled with focus and provided with all efforts and resources to succeed in it, explained that building the state require vision and plan, policies and priorities and a competent capable team.
His eminence pointed out that the Al-Hikma National Movement is the movement of youth and was able to implement the slogan of empowering women through roles given to them in leadership positions in the Al-Hikma Movement, plus being characterized of patriotism, openness to all components and involving them in decision-making at the General Conference and in selecting leadership units of the movement.